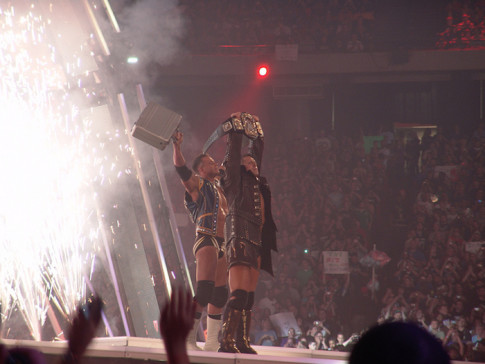 The FBI has said that they are “aware of reports of an alleged threat that includes an Atlanta, Georgia venue and event” which was allegedly uncovered by the hacktivist collective known as “Anonymous.”

“While we take all threats seriously, we do not have specific or credible information of an attack at this time. We have, however, made the proper notifications as we continue to work closely with our law enforcement and private sector partners to keep our community safe.”

In response the Phillips Arena released the following statement which may get ticket-holders endorphin’s flowing:

Federal, state and local law enforcement authorities have confirmed there is no specific or credible information involving a threat against tomorrow’s WWE Survivor Series at Philips Arena. However, WWE and Philips Arena have coordinated with the appropriate agencies and law enforcement, and significantly increased security measures to ensure the safety of all those in attendance, which is our highest priority.

Doors will open at 6 p.m. to help fans avoid any delays in entering the arena due to the additional precautionary security procedures put in place.  Fans are encouraged to take public transportation (MARTA) to the event and are advised that bags will not be permitted in the arena.

WWE superstar Tripple H had the following to say on Twitter:

.@WWE Survivor Series is currently scheduled as planned while we investigate reports with authorities.

The WWE has no intentions to cancel the event despite reports.

It is also important to note that the “Survivor Series” is a major PPV event. Tens of thousands are set to attend in person and millions more are set to watch on the WWE Network and Pay Per View. In other words, this would indeed be a high value target for ISIS.