On Tuesday, Chinese Vice Foreign Minister Liu Zhenmin told the press that contrary to the narrative being propagated by Washington and its allies in the South Pacific, Beijing had actually shown “great restraint” in the South China Sea.

China, Liu went on to explain, has tolerated the “occupation” of the disputed waters even as Beijing has “both the right and the ability to recover the islands and reefs illegally occupied by neighboring countries.” Essentially, Liu said China would be well within its rights to forcibly expel The Philippines, Malaysia, and Vietnam from the Spratlys.

Liu’s comments came ahead of the Asia-Pacific Economic Cooperation summit held in Manila on Thursday and Friday.

At the close of the Summit, Japanese PM Shinzo Abe met with President Benigno Aquino – who earlier this year compared the Chinese to Nazis – to discuss the possibility that Japan could provide Manila with “large ships” that the Philippines can use to patrol the South China Sea.

As Reuters reported on Friday, “the deal will mark the first time Japan has agreed to directly donate military equipment to another country, and is the latest example of Abe’s more muscular security agenda.”

“There was a request from President Benigno Aquino regarding the provision of large patrol vessels to the Philippine Coast Guard and Japan would like to consider the specifics,” Abe said in a statement.

Reuters goes on to note that “rather than challenge Beijing directly by sending warships or planes to patrol the South China Sea, Japan is helping to build the military capacity of friendly nations with claims to parts of the waterway.”

Well don’t look now, but Abe may soon move beyond the mere provision of ships to Japan’s allies. Here’s Nikkei with more:

Abe said his government is watching how the situation in that body of water affects Japan’s national security. Several nations have competing claims to various islands in the South China Sea.

“The United States-Japanese alliance is one of the lynchpins of our security as well as Japan’s,” Obama told reporters before his roughly 90-minute meeting with Abe, their first since the prime minister visited Washington in April.

In their talk, Abe expressed support for what the U.S. calls “freedom of navigation exercises” in the South China Sea — sailing warships through waters claimed by China around islands it has built. Obama said America will continue to do so routinely.

Japan will support countries with a stake in the situation and reject all unilateral actions that seek to change the status quo or raise tensions, Abe said.

Bear in mind that in addition to the generally “frosty” relations between Tokyo and Beijing, Japan and China are at odds over Beijing’s construction of oil and gas exploration platforms close to disputed waters in the East China Sea: 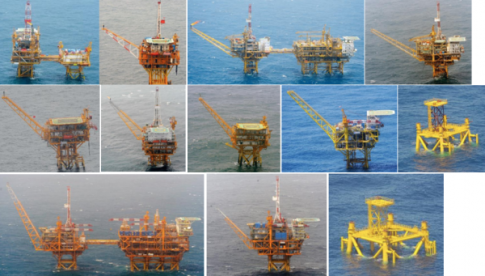 Make no mistake, if Japan starts to conduct the same type of “freedom of navigation” exercises near the Spratlys that the US has now pledged to carry out at least twice per quarter, it will be more than Beijing can bear.

The US is one thing, Japan is entirely another and if Ash Carter and The Pentagon are really looking to escalate a South Pacific conflict, they can certainly do so by encouraging Abe to send warships near Fiery Cross, Subi, and Mischief.