– MUSLIM REFUGEES GO ON HUNGER STRIKE: Demand $2000 Euros Per Month…What They Do Next Is More Outrageous…

Hunger strikes for the oppressed seem to be all the rage, both at home and abroad…

“The refugee crisis has many faces. Alongside the urgent need of many, there are also some who believe they can exploit this Culture of Welcoming to make shameless demands,” said Christian Ragger who represents the Carinthia branch of the Freedom Party of Austria in the regional parliament.

He is making reference to events currently underway in St. Kanzian. On Tuesday 20 asylum seekers went on hunger strike because they were given residency permits, as the law provides for, and not passports, and because they are not receiving 2000 euros of pocket money each month. 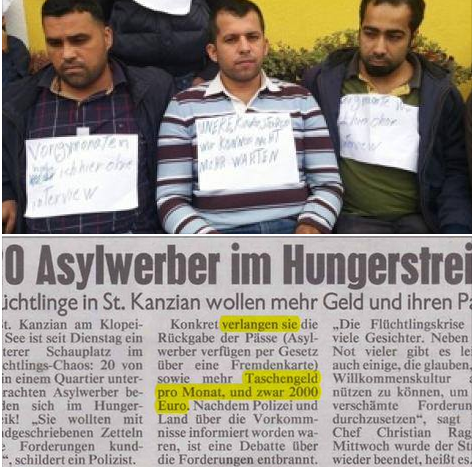 The most bizarre thing is that these “striking” asylum seekers also want to hold a press conference. They apparently assume that related reports in the media will ensure their demands are met. Via: APA

(Why is it that most of those refugees are young males? Shouldn’t they mainly consist of women & children and elderly people? You wouldn’t believe how many of those migrants have ‘lost’ their passports and own the newest iPhone.  And it is not reported in the media that several states in Germany have already declared a state of emergency, because those mainly young male migrants just go into supermarkets and stores, eat and drink whatever they want and take with them whatever they want, leaving a total mess. Many supermarkets/stores refuse to open without police protection and will not let more than 6 refugees inside. Many stores are not even filling up the shelves anymore. Police forces are totally overstretched. Fights between migrants are constantly breaking out on a daily basis, needing hundreds of police just to get things back under control. Then refugees are just disappearing, even entire camps just have disappeared. Also German police forces have found 3 containers full of weapons. About the containers in Germany we do have direct confirmation from police forces. There has been no report in the totally controlled media about this.)

3 thoughts on “Migrant Crisis: REFUGEES GO ON HUNGER STRIKE: DEMAND $2000 Euros Per Month … What They Do Next Is Even More Outrageous …”