– Even The 1% Is Hurting: Swiss Watch Exports Plunge Most Since Financial Crisis:

As the poor get poorer, so the saying goes, the rich get richer; and until recently that was not just true, but apparently mandated so by The Fed. However, the last few months have seen the so-called “1%” appearing to struggle a little in their largesse. As we noted previously, not only are luxury jet values dropping for the first time since 2009, London mansion prices plunging, San Francisco home sales collapsing, and Sotheby’s laying people off, but now, as Bloomberg reports, Swiss watches – the ultimate in luxury extravagance – have seen exports crash by the most since the financial crisis.

Swiss watch exports collapsed 12.3% YoY in October… the worst since the financial crisis and not seen outside of a US recession… 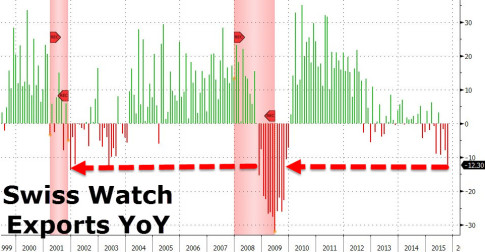 “2015 has been one to forget for the watchmakers,” said Jon Cox, an analyst at Kepler Cheuvreux in Zurich. As Bloomberg reports,

Swiss watch exports had their biggest decline in six years in October, led by a 39 percent slump in shipments to Hong Kong, the industry’s largest market.

Exports to the U.S. dropped 12 percent.

But aside from that, it appears only one thing has really benefited from The Fed’s largesse (as demand for Diamonds and Fine Wine has crashed)… 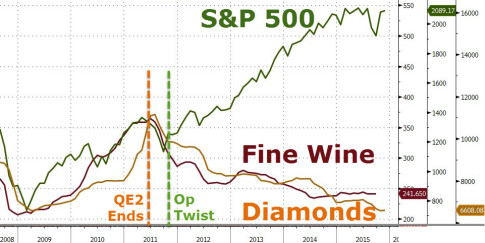 The rich appear to be cinching up the purse strings, and as we concluded previously, that is not a good sign…

So the rich are becoming less rich? To an extent, yes. Recent declines in commodity prices and emerging market debt have no doubt taken a bite out of some big portfolios. Meanwhile hedge funds, the preferred investment management vehicle of the uber-wealthy, have done badly for the past couple of years, with some high-profile implosions generating headlines.

These disappointments have lowered the net worth of some big players and made others more cautious. Hence the lessened demand for the most pretentious assets.

The impact on the global economy? Almost certainly bad, since the 1% are the marginal buyers of so many reference assets like blue-chip stocks and government bonds. To the extent that they grow cautious, the bid for a lot of things will be lower, cutting corporate profits, equity valuations and high-end asset prices.

Put another way, when the only healthy part of an already-impaired system turns negative, everyone will feel the resulting pain.