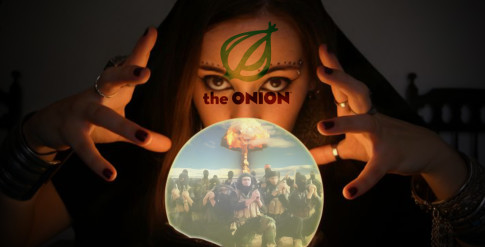 “George W. Bush may think that a war against Iraq is the solution to our problems, but the reality is, it will only serve to create far more,” read a 2003 article on The Onion a week after then-President George Bush launched the Iraq War. While a wide variety of organizations and individuals also rebuked that invasion, the satirical newspaper offered one of the most accurate assessments to date. So accurate, in fact, it all but predicted the rise of the Islamic State.

In the mock-debate piece, entitled, “This War Will Destabilize The Entire Mideast Region And Set Off A Global Shockwave Of Anti-Americanism vs. No It Won’t,” The Onion highlighted the very real risks of war.

“This war will not put an end to anti-Americanism; it will fan the flames of hatred even higher. It will not end the threat of weapons of mass destruction; it will make possible their further proliferation. And it will not lay the groundwork for the flourishing of democracy throughout the Mideast; it will harden the resolve of Arab states to drive out all Western (i.e. U.S.) influence.”

“If you thought Osama bin Laden was bad, just wait until the countless children who become orphaned by U.S. bombs in the coming weeks are all grown up. Do you think they will forget what country dropped the bombs that killed their parents? In 10 or 15 years, we will look back fondly on the days when there were only a few thousand Middle Easterners dedicated to destroying the U.S. and willing to die for the fundamentalist cause. From this war, a million bin Ladens will bloom.”

More than a decade into the chronic conflict, the Onion’s projects are eerily—albeit predictably—accurate. By 2006, national security experts were warning the war was inspiring further radicalism. One of the Boston Marathon bombers was radicalized by the Iraq War. The Charlie Hebdo shooters were also radicalized by Western intervention in the Middle East.

As the Guardian pointed out earlier this year, “there was no al-Qaida in Iraq until the US and Britain invaded. And the US has certainly exploited the existence of Isis against other forces in the region as part of a wider drive to maintain Western control.”

The Onion article poked fun at empty rebuttals many proponents of war offered at the time.

“Why do you keep saying these things? I can tell when there’s trouble looming, and I really don’t sense that right now. We’re in control of this situation, and we know what we’re doing. So stop being so pessimistic,” wrote the fictional opposing debater, Bob Sheffer.

But the United States was not in control—and the pessimism (read: realism) was warranted. The Islamic State has thrived not only because of radical Islam, but because of resentment sparked by American intervention. A recent report by The Nation details interviews the author conducted with imprisoned Islamic State fighters. Journalist Lydia Wilson explained that while most people in the West believe the Islamic State is rooted solely in religion, it has attracted fighters for other reasons:

“They are children of the occupation, many with missing fathers at crucial periods (through jail, death from execution, or fighting in the insurgency), filled with rage against America and their own government. They are not fueled by the idea of an Islamic caliphate without borders; rather, ISIS is the first group since the crushed Al Qaeda to offer these humiliated and enraged young men a way to defend their dignity, family, and tribe,” she wrote.

As Eckert  opined in The Onion over 12 years ago:

“Is our arrogance and hubris so great that we actually believe that a U.S. provisional military regime will be welcomed with open arms by the Iraqi people? Democracy cannot possibly thrive under coercion. To take over a country and impose one’s own system of government without regard for the people of that country is the very antithesis of democracy. And it is doomed to fail.”

“No it won’t. It just won’t. None of that will happen,” he replied to Eckert.

“You’re getting worked up over nothing. Everything is going to be fine. So just relax okay? You’re really overreacting.”

This is not the first Onion piece to foreshadow real world events. Earlier this year, a satirical article published on the site predicted the United States would offer weapons to Israeli Prime Minister Benjamin Netanyahu to placate him following Obama’s progress on the United States’ nuclear deal with Iran.