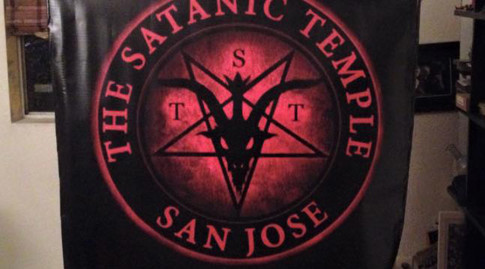 With fear of Islamophobic assaults rising after recent terror attacks in Paris, Muslims in two US states have gotten a helping hand from… Satanists. “Big dudes” have offered to escort Muslims and Sikhs afraid of hate-attacks for groceries and elsewhere.

“If there is anyone in the San Jose region who is Muslim and afraid to leave their home out of fear for some kind of backlash, don’t hesitate to reach out to us,” the San Jose, California chapter of the Satanic Temple posted on Facebook.

The San Jose chapter’s initiative is supported by the national organization’s Minneapolis chapter, which also offered to help Muslims in the Twin Cities. “It’s not to ride the tide of sentiment or capitalize on people for further name recognition,” the Satanic Temple in Minneapolis said on Facebook.

Posted by The Satanic Temple Minneapolis Chapter on Wednesday, November 18, 2015

In San Jose, the group has also extended their offer to followers of Sikhism, which is mostly observed in India.

“This is also extended to Sikhs as many of the ignorant and hateful do not understand the difference,” the San Jose chapter said.

Both chapters of the Satanic Temple have received a great deal of support and appreciation from both Muslims and others.

“Agreed, we appreciate it very much. It’s sad when we as Muslim women are afraid to leave our homes out of fear of what others might do. We are not the violent ones….,” one commenter said on Facebook.

“I’m a Christian, and y’all have shown more care than a majority of other Christians I know,” another woman said.

Some have even asked to join the Satanists so that they could volunteer, too.

“Can I volunteer to help? I’m in San Jose!” said one commenter under the San Jose chapter’s post. “I live in Belmont. I’m not a Satanist, but I’ll walk with you,” said another.

Satanists in Minneapolis seemed to be slightly surprised by the attention they have received from media and followers on Facebook.

“It looks as though we’ve made the news,” the group said. “While I’m appreciative of the coverage and help to get the message out to those that need us, the point of our offer has always been to help anyone we can. I would like to re-state that.”

However, no Muslims have asked the groups for help so far.

“We are happy to be of service to our community. Unfortunately, we’ve had no takers as of yet,” a representative of the Minneapolis chapter, Curt Landsman, told International Business Times.

Americans think Islam is ‘at odds’ with US values, see discrimination against Muslims https://t.co/qAzGRC26Mwpic.twitter.com/dqK8Eskqnw

Concerns over Islamophobia in the aftermath of the Paris attacks are not all that groundless. Seven in ten Americans say that Islam’s values are “at odds” with American values and way of life, a recent study has revealed.

Man in Joker mask threatens to kill ‘1 Arab a week’ in Canada, gets arrested https://t.co/uZ2UBWhQp9pic.twitter.com/pT7kUSzUJu

Anti-Muslim sentiment has strengthened in Canada as well. A man wearing a mask portraying Batman’s arch enemy, the Joker, made headlines this week after threatening to kill one Muslim every week in an online video. The man has been arrested.