– Over Half Of New Yorkers Struggle To Make Ends Meet As “Tale Of Two Cities” Deepens:

Despite two years of liberal redistribution from Mayor de Blasio, the majority of New Yorkers continue to struggle to make ends meet mirroring his 2013 “tale of two cities” campaign theme. The NYTimes poll finds that only 20% are living comfortably while 51% are just getting by or finding it difficult to manage, and shows even greater disparities in quality of life across the city’s five boroughs. 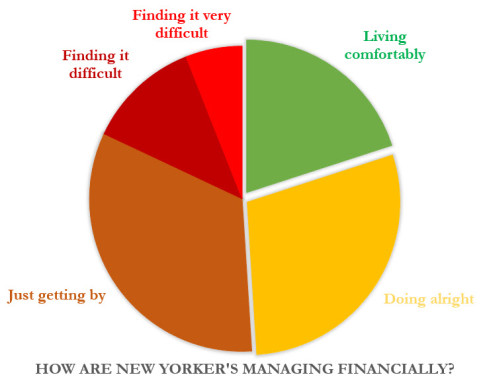 As The New York Times reports,an atmosphere of economic anxiety pervades all areas of the city…

Residents of the Bronx and Brooklyn shared the most pronounced sense of economic insecurity, and the lowest confidence in local government and the police — a distinctly different experience from the rest of the city.

In those boroughs, nearly three in five residents said they were straining to make ends meet. In the Bronx, 36 percent said there had been times in the past year when they did not have the money to buy enough food for their family; only one in five said they and their neighbors had good or excellent access to suitable jobs.

But if the city appears divided into broad camps of haves and have-nots, it was, perhaps surprisingly, the less privileged segments of New York that shared the most positive outlook on the future.

Four in 10 Brooklyn residents said their neighborhood was getting better, and 36 percent of Bronx residents said the same. Manhattanites and Staten Islanders were most likely to say things were getting worse in their area.

Government is not seen as addressing the problems that trouble these areas: In the Bronx, only one in five respondents gave local government high marks for meeting their needs. In Brooklyn, that figure was a bit higher, at 26 percent, compared with roughly a third in Manhattan, Queens and Staten Island.

“I feel like people who were born in this neighborhood stay here our whole lives,” Ms. Thomas said. “If it was true that we had opportunities for advancement, then all of us wouldn’t still be here 20 years from now.”