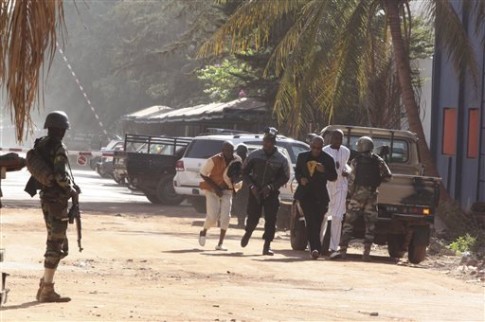 Gunmen attacked a luxury hotel in Bamako, Mali on Friday, taking 170 guests and hotel staff hostage, according the company that runs the hotel.

CNN is reporting that three people — two Malian citizens and a French citizen — have been killed in the standoff.

In a statement issued on its website, the Rezidor Hotel Group, which operates the Radisson Blu in Bamako, said it “is aware of the hostage-taking that is ongoing at the property today, 20th November 2015. … Our safety and security teams and our corporate team are in constant contact with the local authorities in order to offer any support possible to re-instate safety and security at the hotel.”

Thirty of the hostages are hotel staff, the group said. The other 140 are guests. The initial statement said that “two persons” have locked in the 170 hostages, though later reports have put the number at 10.

The ongoing gun battle involves “jihadists” and automatic weapons, Agence France-Presse reported. The identity of the gunmen or the group to which they belong is not known.

“It’s all happening on the seventh floor, jihadists are firing in the corridor,” a security source told the news agency.

Kassim Traoré, a Malian journalist was in a building about 150 feet from the Radisson, told the New York Times that the gunmen asked hostages to recite a Muslim declaration called the shahada. Those who could were allowed to leave the hotel.

Some of those who left, including Malians and foreigners, were not wearing any clothes as they were taken to a police station, Traoré said.

As of 11 a.m. local time, the Associated Press reported that about 20 hostages had been freed, citing a Malian army commander.

A Chinese citizen who is trapped in the hotel told Xinhua, the Chinese state news agency, that he heard gunshots go off outside his room around 6:30 Friday morning. He can smell smoke in the hallway and his room, he said. Internet service in the hotel has been flickering on and off, and when he tried to call down to reception the phone just rang.

Olivier Salgado, a spokesperson for the UN mission to Mali, told CNN the hotel was host to a large delegation of UN workers involved in the ongoing peace process in Mali.

The man, who is identified by his last name, Chen, sent the agency videos and photos from the hotel showing local police in a stand off with the gunmen.

Police have sealed off the area and are blocking roads. Paris-based RTL Radio is reporting that French soldiers have been dispatched to the scene.

French troops have been stationed in Mali since 2013 to help Mali fight insurgents in the northern part of the country.

The U.S. Embassy in Mali tweeted Friday morning that it is aware of the “ongoing active shooter operation” at the Radisson and urged embassy staff and U.S. citizens to shelter in place. The White House says that President Obama has been briefed on the situation.

The Radisson Blu is a 190-room hotel located near the center of Bamako, Mali’s capital. According to the BBC, the US-owned hotel is popular with expats working in the country.

Northern Mali came under the control of Islamist militants in 2012, but were ousted by a French-led offensive the following year.

But extremist violence still crops up in the country. In March, attackers reportedly shouting “Allahu Akbar” fired on a popular bar in Bamako, according to the BBC. Three Malian civilians were killed, along with a Belgian security officer working for the European Union and a French national.

Two months ago, more than a dozen people — including five United Nations contractors — were killed in a 24-hour hostage drama at a hotel in Sevare, in central Mali. Responsibility for that attack was claimed by Algerian jihadi leader Mokhtar Belmokhtar, according to the AFP. The infamous one-eyed militant had also orchestrated the bloody seizure of an Algerian gas facility in 2013, where at least 100 workers were held hostage and dozens were killed.