“We wonder how long until someone finally asks the all important question regarding the Islamic State: who is the commodity trader breaching every known law of funding terrorism when buying ISIS crude, almost certainly with the tacit approval by various “western alliance” governments, and why is it that these governments have allowed said middleman to continue funding ISIS for as long as it has?”

– The Most Important Question About ISIS That Nobody Is Asking:

The question of how the Islamic State funds its sprawling caliphate has been discussed in the past: we first broke down the primary driver of ISIS revenue well over a year ago, in September 2014, when we explained that “ISIS uses oil wealth to help finance its terror operations.” 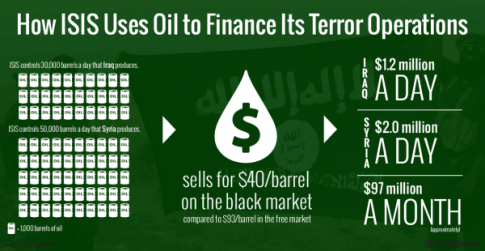 According to the Iraq Energy Institute, an independent, nonprofit policy organization focused on Iraq’s energy sector, the army of radical Islamists controls production of 30,000 barrels of oil a day in Iraq and 50,000 barrels in Syria. By selling the oil on the black market at a discounted price of $40 per barrel (compared to about $93 per barrel in the free market), ISIS takes in $3.2 million a day.

The oil revenue, which amounts to nearly $100 million each month, allows ISIS to fund its military and terrorist attacks — and to attract more recruits from around the world, including America.

Most importantly, we added that to be successful in counterterrorism efforts, “the U.S. and its allies must “push the Islamic State out of the oil fields it has captured and disrupt its ability to smuggle the oil to foreign markets.”

None of this was surprising to anyone, but what was quite surprising is that it took the allied forces over a year to take the oil revenue threat seriously and begin targeting the Islamic State’s oil infrastructure in earnest.

Today, in an article titled “Why US Efforts to Cut Off Islamic State’s Funds Have Failed” Bloomberg tries to explain just how it is that despite a more than a year long campaign, ISIS funding remains as strong as ever, and notes that “the latest round of airstrikes are directly related to the administration’s new math. “You have to go after the oil, and you have to do it in a serious way, and we’ve just begun to do that now,” citing Benjamin Bahney, an international policy analyst at the Rand Corp., a U.S. Department of Defense-funded think tank.

To be sure, there are other sources of revenue: Bloomberg correctly notes that “even if the U.S. finally weakens the group’s oil income, Bahney and other analysts in the U.S., the Middle East, and Europe contend, Islamic State has resources beyond crude—from selling sex slaves to ransoming hostages to plundering stolen farmland—that can likely keep it fighting for years.”

Still, without a doubt, the dominant source of funds for the terrorists is oil, and not just oil, but a well-greased logistical machine that keeps thousands of barrels moving from unknown pumps to even refineries, and ultimately to smugglers who operated out of Turkey and other countries.

Most often refined in Syria, the group’s oil is trucked to cities such as Mosul to provide people living under its black banner with fuel for generators and other basic needs. It’s also used to power the war machine. “They have quite an organized supply chain running fuel into Iraq and [throughout] the ‘caliphate,’  ” says Michael Knights, an Iraq expert at the Washington Institute for Near East Policy, using the militant group’s religiously loaded term for itself. Because the U.S. apparently believed the real money for Islamic State came primarily via selling refined oil, rather than crude, last year’s strikes heavily targeted refineries and storage depots, says Bahney. He and other experts say that strategy missed an important shift: Militants increasingly sell raw crude to truckers and middlemen, rather than refining it themselves. So while Islamic State probably maintains some refining capacity, the majority of the oil in IS territory is refined by locals who operate thousands of rudimentary, roadside furnaces that dot the Syrian desert.

Here is where it gets interesting: Bloomberg cites Pentagon officials who acknowledge “that for more than a year they avoided striking tanker trucks to limit civilian casualties. None of these guys are ISIS. We don’t feel right vaporizing them, so we have been watching ISIS oil flowing around for a year,” says Knights. That changed on Nov. 16, when four U.S. attack planes and two gunships destroyed 116 oil trucks.

So any qualms about vaporizing “innocent civilians” promptly disappeared when the Pentagon realized that its 1+ year long campaign had been an epic debacle, that a suddenly surging ISIS was stronger as ever, and most importantly, that its critical revenue lifelines had been largely untouched for years. Perhaps they weren’t innocent civilians after all.

It is still unknown if this recent crackdown on “dumping oil”, or crude which dramatically lowers the price of oil in global markets – it certainly is an odd coincidence that the price of Brent and WTI began its tumble last fall, just when the Islamic State made its dramatic appearance on the world scene – will have an effect and cut off the primary source of funds to ISIS.

But what we have been wondering for months and what we hope some enterprising journalist will soon answer, is just who are the commodity trading firms that have been so generously buying millions of smuggled oil barrels procured by the Islamic State at massive discounts to market, and then reselling them to other interested parties.

In other words, who are the middlemen.

What we do know is who they may be: they are the same names that were quite prominent in the market in September when Glencore had its first, and certainly not last, near death experience: the Glencores, the Vitols, the Trafiguras, the Nobels, the Mercurias of the world.

To be sure, funding terrorist states is not something that some of the most prominent names in the list above have shied away from in the past.

Which one (or ones) are the guilty parties – those who have openly breached terrorism funding laws – we don’t know: it may be one, or more of the above, or someone totally different.

At this point, however, three things are certain: whoever the commodity trading house may be that is paying ISIS-affiliated “innocent civilians” hundreds of millions of dollars for their products, they are perfect aware just who the source of this deeply discounted crude is. Crude so deeply discounted, in fact, it results in massive profits for the enterprising middleman who are engaging in openly criminal transactions.

The second certainty: whoever said middleman is, it is very well known to US intelligence services such as the NSA and CIA, and thus to the Pentagon, and thus, the US government.

The third certainty is that while the US, and Russia, and now France, are all very theatrically bombing something in the Syrian desert (nobody really knows what), the funding of ISIS continues unabated as someone keeps buying ISIS oil.

We wonder how long until someone finally asks the all important question regarding the Islamic State: who is the commodity trader breaching every known law of funding terrorism when buying ISIS crude, almost certainly with the tacit approval by various “western alliance” governments, and why is it that these governments have allowed said middleman to continue funding ISIS for as long as it has?