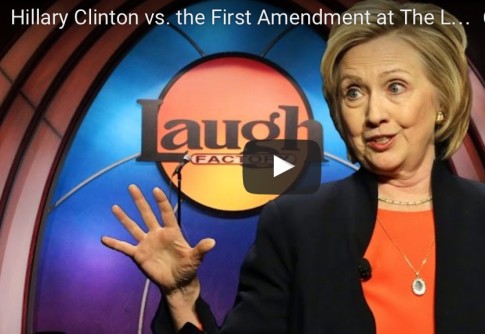 The one upside of Hillary Clinton becoming President, is that her endless stream of stupidity will result in more content for this writer than I could ever imagine.

Hot off her recent debate performance in which she claimed that the reason she is owned by Wall Street is because of 9/11, her aides are now demanding a Hollywood comedy club take down a video of comedians mocking her.

Just in case you have any doubt about what a Hillary presidency would look like, we learn from Judicial Watch:

In what appears to be a first for a serious presidential contender, Hillary Clinton’s campaign is going after five comedians who made fun of the former Secretary of State in standup skits at a popular Hollywood comedy club.

A video of the short performance, which is less than three minutes, is posted on the website of the renowned club, Laugh Factory, and the Clinton campaign has tried to censor it. Besides demanding that the video be taken down, the Clinton campaign has demanded the personal contact information of the performers that appear in the recording. This is no laughing matter for club owner Jamie Masada, a comedy guru who opened Laugh Factory more than three decades ago and has been instrumental in launching the careers of many famous comics. “They threatened me,” Masada told Judicial Watch. “I have received complains before but never a call like this, threatening to put me out of business if I don’t cut the video.”

Masada told Judicial Watch that, as soon as the video got posted on the Laugh Factory website, he received a phone call from a “prominent” person inside Clinton’s campaign. “He said the video was disgusting and asked who put me up to this,” Masada said. The Clinton staffer, who Masada did not want to identify, also demanded to know the names and phone numbers of the comedians that appear in the video. Masada refused and hung up. He insists that the comedy stage is a sanctuary for freedom of speech no matter who is offended. “Just last night we had (Emmy-award winner) Dana Carvey doing Donald Trump and it was hilarious,” Masada said.

Let’s now make sure this video benefits from a huge Streisand effect.
Should someone this thin-skinned, someone so weak she demands a safe space from humor, ever be considered for the Presidency?