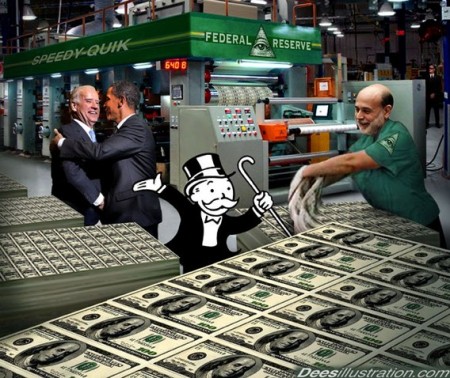 – Federal Reserve Admits It Has NO IDEA What It’s Doing:

Federal Reserve Chair Janet Yellen is stressing the need to review the unconventional monetary policies that central banks around the world deployed in response to the 2008 global financial crisis.

She said Thursday that the post-crisis period offers policymakers an opportunity to assess the effectiveness of the tools and better understand the impact of new regulation.

“Policymakers have to carefully weigh the advantages and disadvantages of alternative monetary implementation frameworks in the presence of new policy tools,” Yellen said in remarks at a two-day research conference sponsored by the Fed.

Translation: We have no idea what’s going on, or whether or policies are helping or making things worse.

The Fed “may need to alter some fundamental assumptions about how Fed policy works if U.S. stays in persistent state of low nominal rates, low inflation.”

But the most important thing Bullard said in his speech titled “Permazero” is that the the US may be entering a permanent period of lower inflation and interest rates. Wait, wasn’t ZIRP and QE supposed to push the US economy, boost inflation and hike rates?Good to know 7 years later that the biggest monetary experiment in history did precisely the opposite of what it was supposed to achieve.

We’ve noted for over 7 years that the Federal Reserve has no idea what it’s doing.

For many years, the world’s most prestigious financial institution, known as the “Central Banks’ Central Bank” – the Bank for International Settlements – has slammed the Fed’s policies of:

Indeed, one the Fed’s core tools – quantitative easing – which is aimed at boosting inflation, may actually CAUSE deflation.

Another core tool – creating a “wealth effect” – actually HARMS the broader economy in the long run.