*Note: When this post was originally published the number was 6 states. It is now 21 states. This map shows the latest additions including Massachusetts and Maine. 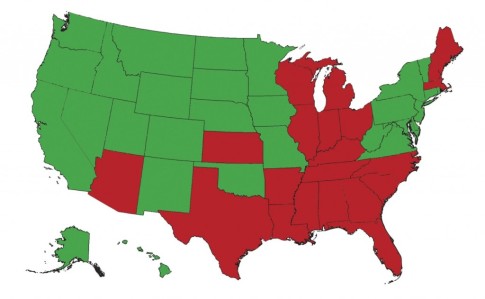 Over the weekend, I published a post titled A Message to Europe – Prepare for Nationalism, which discussed, amongst many other things, the impact increased anti-refugee sentiment would have on European politics in the coming years. Although I didn’t expect the anti-refugee sentiment to emerge so rapidly in these United States, based on the headlines I’m seeing today, it undoubtably has.

Texas, Arkansas, Indiana and Louisiana on Monday joined two other U.S. states in saying they will no longer accept Syrian refugees, contending it is too dangerous to let in people from that war-torn country following Friday’s deadly Paris attack.

Republican Governors Greg Abbott of Texas, Asa Hutchinson of Arkansas, Mike Pence of Indiana and Bobby Jindal of Louisiana, followed the lead of Alabama and Michigan in saying their states would no longer help support the Obama administration’s goal of accepting 10,000 Syrian refugees in the coming years.

“Texas cannot participate in any program that will result in Syrian refugees – any one of whom could be connected to terrorism – being resettled in Texas,” Abbott said in an open letter to U.S. President Barack Obama on Monday. “Neither you nor any federal official can guarantee that Syrian refugees will not be part of any terroristic activity.”

But it was unclear what authority governors had to stop admitting refugees into their states, legal experts said.

The United States admitted 1,682 Syrian refugees in the federal fiscal year that ended Sept. 30, a sharp jump from the 105 admitted a year earlier. Texas, California and Michigan accepted the largest number of people fleeing the war.

As mentioned above, it doesn’t seem clear what options these various states have in practice to refuse refugees if the feds let them in. As such, you have to wonder if this is nothing more than political bluster. It will be interesting to see how this unfolds.