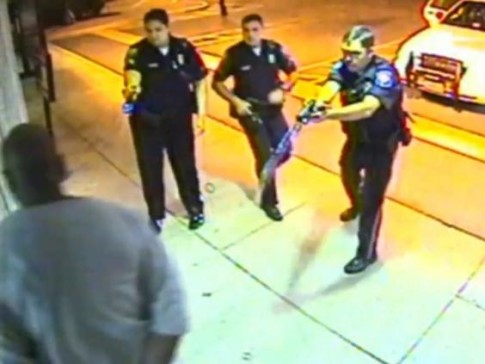 Linwood Lambert was tasered outside a hospital, arrived unconscious at police station and was pronounced dead by the time he was taken back to hospital.

The incident took place in May 2013 in South Boston, a small town in southern Virginia; and it is receiving renewed attention after a MSNBC report on Wednesday.

Linwood Lambert was taken into custody when police responded to a noise complaint and found the 46-year-old acting in a paranoid manner.

The officers decided to take him to the nearby hospital so he could receive medical treatment. When they arrived, Mr Lambert attempted to flee the officers and ran towards the hospital entrance.

Unable to enter as his hands were handcuffed, officers caught up with Mr Lambert and shot him with Tasers.

According to MSNBC, Officer Tiffany Bratton said “Every time you get up, I’m going to pop you”.

He was then taken to jail and footage shows the 46-year-old lost consciousness during this journey.

An ambulance brought him back to the same hospital where the incident took place and he was pronounced dead on arrival.

Mr Lambert’s family filed a $25 million lawsuit in April accusing the officers of unlawfully arresting him and using “excessive, unreasonable and deadly force”.

The officers reject these claims, saying the stun gun was “an appropriate and necessary use of force alternative to more harmful and lethal options available.”