Reports are coming in fast and furious from Paris where witnesses have reported multiple explosions along with possible shootout in a restaurant near Place de la République.

France 24 is reporting that “masked armed men fired from all sides”:

A shooting at the Kalashnikov has left several dead in a restaurant in the tenth arrondissement. At least seven people were injured, according to our information. According to a reporter on site BFMTV, bodies lying on the ground.

The shots were heard near the metro station Goncourt. A large security cordon was established around the perimeter. The police are asking all residents to take cover in buildings and gradually close all the streets. They evacuated all the bars, restaurants and terraces nearby.

The shooters or have not yet been apprehended.

Here some images from the scene:

It now looks as though there were at least three explosives. 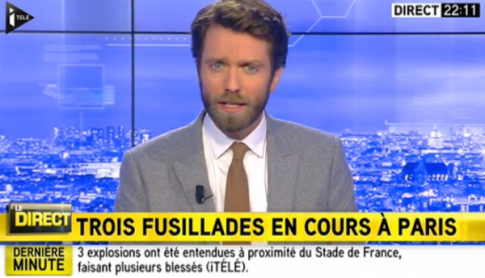 Paris burning (set on fire by the youth) will be one of the last signs before WW3.