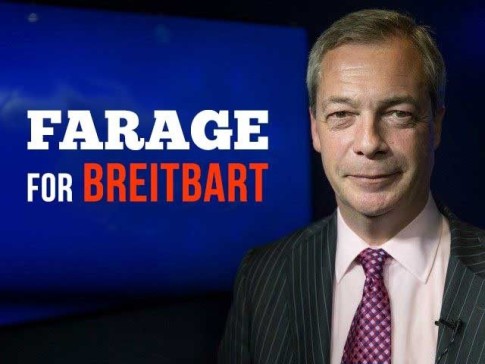 – FARAGE FOR BREITBART: Europe Can’t Put The Migrant Champagne Cork Back In The Open Borders Bottle:

As all high-living Breitbart London readers will know, getting the cork out of a champagne bottle can sometimes be a little tricky. But once achieved it is followed by a rush of bubbles and energy. But if half way through the bottle you decide you’ve had enough, have a go at putting the cork back in.

Once, in a moment of sobriety, I attempted this exercise. It’s impossible.

As I warned in April, face to face with European Commission President Jean Claude Juncker in the European Parliament, the implementation of the European Union’s (EU) common asylum policy was basically sending a message that anyone that came would be welcome. I warned that this could lead to an exodus of biblical proportions. In a sense, Mr Juncker was just loosening the cork.

But in a full, party-style display, Germany’s Chancellor Angela Merkel popped the cork hoping onlookers would see how high it shot in the air.

Her plea was for all to come. That whatever the numbers, Germany could cope. She thought she was setting a wonderful example to the rest of Europe and indeed the world.

And then it began. What had begun as a small flotilla of boats across the Mediterranean became a stampede through the Western Balkans. Perhaps unsurprisingly, Hungary’s Prime Minister Viktor Orban began to build a fence and was widely castigated for it.

But now in the last two days even the most liberal-minded country in Europe, Sweden, has begun to put border controls in place.

After the failure and permanent crisis of the EU’s fatally flawed currency, we now see European Council President Donald Tusk saying the idealistic Schengen passport-free zone in Europe is directly under threat.

The strains that have led to this have not come from within the Union, though for many in the British referendum debate this is still a huge issue.

Perhaps when Schengen was invented nobody ever envisaged that massive pressures such as this migrant crisis would come from the outside.

So now the language has changed with Mr Juncker, Mr Tusk and even the wild looking Europhile Guy Verhofstadt now recommending that Frontex the EU’s border force be beefed up.

The cry now is that Europe’s borders must be protected. The cork must be put back into the champagne bottle.

But there is a problem here. At the Valletta conference this week – where the United Kingdom was represented by the fanatically pro-EU Dutch Prime Minister Mark Rutte (you really couldn’t make it up) – the leaders gathered with a firm resolve that African migrants who would not qualify under any circumstances as refugees (remember I was condemned for saying this over the course of the summer) would be repatriated.

But predictably that idea got nowhere. And now they will introduce a voluntary scheme. Utterly useless.

So the message that goes out, leading millions around the world to believe is that the open door to Europe is still very much open. The European Commission themselves think a further three million will come in the next couple of years. Some are even talking about ten million by 2020. This is clearly headed for total disaster.

Being a member of the European Union is like being on a runaway train that is headed for the buffers. In the interests of our national security I do not want us to be on that train when it crashes. No issue could highlight how badly led and utterly impossible the European project is more than the migrant crisis. This is the decisive issue that I now genuinely believe will lead to Britain voting to leave in our upcoming referendum on the matter. Indeed this morning we see the first poll giving the lead side a six point advantage.

So the great “renegotiation” was presented with only one item to actually be changed. Migrant benefits.

And yet even on the day it was clear that Prime Minister David Cameron was blinking as he said that it wouldn’t necessarily need to be a four year period that migrants would be denied benefits for.

Today from inside government we’re told they are beginning to recognise that only by changing UK benefits for UK workers can they restrict migrant benefits.

This is not a renegotiation. It is the British social security system having to adapt to EU circumstances. I am reminded of the quote by the late Milton Friedman, the high priest of free trade and small government. He said: “you cannot have open door immigration and a social security system”. How right he was.

Nigel Farage is the leader of the UK Independence Party