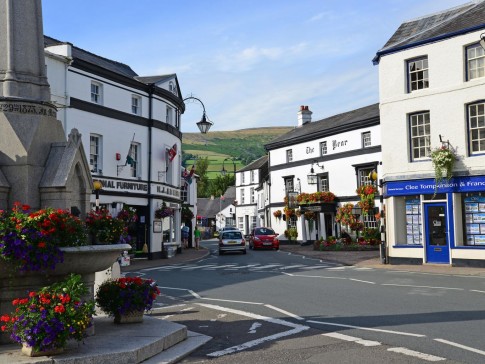 When independent traders in a small Welsh town discovered the loopholes used by multinational giants to avoid paying UK tax, they didn’t just get mad.

Now local businesses in Crickhowell are turning the tables on the likes of Google and Starbucks by employing the same accountancy practices used by the world’s biggest companies, to move their entire town “offshore”.

Advised by experts and followed by a BBC crew, family-run shops in the Brecon Beacons town have submitted their own DIY tax plan to HMRC, copying the offshore arrangements used by global brands which pay little or no corporation tax.

Crickhowell residents want to share their tax avoidance plan with other towns, in a bid to force the Treasury into legislation to crack down on loopholes which allowed the likes of Amazon to pay just £11.9m of tax last year on £5.3bn of UK internet sales.

A town dominated by independent businesses, some of which have been passed down three generations, Crickhowell traders recently fought off a high street planning application from a large supermarket chain.

In the BBC2 documentary, The Town that Went Offshore, the residents express their anger at companies including Caffé Nero, which has not paid corporation tax in the UK since 2008, despite recording sales worth £1.2 billion.

The film, presented by Heydon Prowse, co-creator of the BBC Three series The Revolution Will Be Televised, follows the Crickhowell shopkeepers as they travel to the Isle of Man, where Caffé Nero’s parent company is based for tax purposes.

Jo Carthew, who runs Crickhowell’s Black Mountain Smokery, which sells local artisan produce, with her family, said: “We were shocked to discover that the revenue generated by hard-working employees in these British high street chains isn’t declared. We do want to pay our taxes because we all use local schools and hospitals but we want a change of law so everyone pays their fair share.”

“Until now, these complicated offshore tricks have only been open to big companies who can afford the lawyers’ fees. But we’ve put our heads together, and worked out a way to mimic them. It’s jolly clever.”

Mrs Carthew said the traders had a “very good meeting” with HMRC when they submitted their offshore tax plan for approval. “It’s a threat to the Government because if they don’t act this could be rolled out to every town. Everything we have proposed is legal.”

George Osborne has pledged to introduce a “Google tax”, hitting large technology companies which divert their profits overseas. But Heydon Prowse said: “As soon as one loophole is closed, another one opens. The Crickhowell traders are sick and tired of shouldering the burden for the entire system. They don’t get invited to cosy chats with HMRC top brass like the major corporations but they are the backbone of the British economy.”

A small market town on the southern edge of the Black Mountains and in the eastern part of the Brecon Beacons National Park, Crickhowell is a popular tourism destination.

John Evans described Crickhowell as the “Glittering Jewel of the Vale” in his 19th century book, The Garden of Wales.

The chain-free High Street prides itself on being one of the few thriving thoroughfares left where local businesses sell local produce.

The town has a population of around 2,800 people.

Crickhowell’s most notable son was the surveyor Sir George Everest (1798–1866), a Surveyor-General of India, after whom Mount Everest was named.