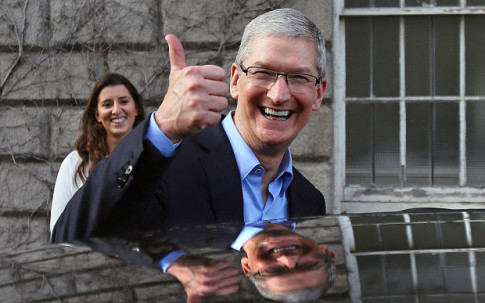 – Apple boss: Next generation of children ‘will not know what money is’:

Tim Cook, chief executive of Apple, makes bold prediction about the death of cash as he promotes Apple Pay alternative

The next generation of children born in Britain “will not know what money is”, the boss of Apple has predicted.

Tim Cook, the chief executive of technology giant, forecast the death of cash by the time current university students have a family.

Cash is still used for more than half of payments by consumers, according to Payments UK, the industry body, but its popularity is falling as people switch to cards and smartphone apps such as Apple Pay and Google Wallet.

Answering questions from students at Trinity College Dublin, Mr Cook said: “Your kids will not know what money is.”

In an outspoken address, he also vowed to deepen his fight against the so-called snooper’s charter. Mr Cook reiterated comments made to The Telegraph this week, stating that his company was commitment to full protection of customers’ data from hackers.

“We plan to continue to encrypt end to end with no back door,” he said. “We will productively work with the governments to try to convince them that’s also in their best interests in the national security sense.”

His views on the future of money represent one of the boldest predictions on the decline of traditional coins and notes.

In a poll for Lloyds Bank this autumn 39 per cent of respondents said they didn’t expect to need cash at all within a decade – around the time Mr Cook seemed to be referencing.

Barclaycard, one of the major innovators in digital technology, said so-called contactless transactions have more than doubled over the past year.

People can now use the “tap and go” technology for any transaction under £30, making it more likely to be used in restaurants and shops as well as cafes and newsagents.

Banks and companies such as Apple have an incentive to promote such messages because they earn money when people use a credit card or alternative payment system to pay.

For instance, banks charge retailers a percentage of the price paid every time a shopper uses a card terminal. The “interchange” fees are being capped at 0.2 per cent for debit cards and 0.3 per cent for credit cards under EU rules.