– 600 Hungry, Angry Chinese Workers “Sleep On The Street” After CEO Disappears With Their Wages:

Because while it is now a virtual certainly that China’s commodity sector will undergo a wave on unprecedented business failures, which should (but may not) be accompanied by a default wave unlike anything China has seen before (quite literally: until last year, China had never seen an actual corporate default, as the government would always step in and bail out the debtor) a scarier prospect emerges when looking at what has been the biggest risk factor for China since day one, and the reason why China’s economy has to keep growing at 7% every year just to absorb the millions of new workers every year: an angry population, and millions of workers who suddenly see their wages plunge – or are left without a job – and turn violent on short notice.

We got a taste of this in September when we reported that as part of China’s coal industry collapse, a company in northern China had just engaged in the biggest mass layoff in China’s history when it fired 100,000 overnight, 40% of its entire workforce. Then, a month ago, we reported that “Thousands Of Angry Unpaid Chinese Workers Protest Shocking Bankruptcy Of Major Telecom Supplier.”

Now, thanks to Radio Free Asia, we find that as the tide goes out in China, things are going from bad to worse.

According to the Chinese website, in the latest confirmation that China’s Politburo is getting far more nervous than it will admit, hundreds of workers at a Hong Kong-owned toy factory in the southern Chinese city of Shenzhen have been protesting since last week after the owner “disappeared,” leaving their wages unpaid. 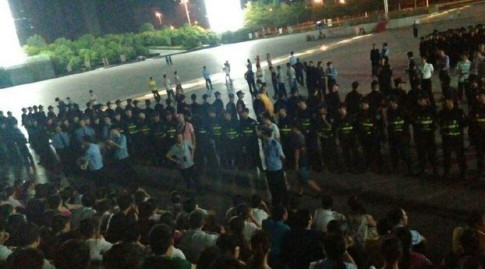 Workers at the Shanghe Jianming Toy Factory in the city’s Bao’an district first discovered that their Hong Kong boss, identified only by his surname Deng, was nowhere to be found, they told RFA.

“Some people are sleeping out on the street next to the factory gates, or in the road, and many are hungry,” a worker surnamed Shen told RFA.

Instead of tracking down the boss and finding why he “absconded” with all his employees’ unpaid wages, “The police sent a lot of people to surround the workers.”

Photos of the scene seen by RFA showed rows of people sleeping on sheets of cardboard by a factory wall, and rows of police guarding a street with barriers placed on it.

An official who answered the phone at the Bao’an district labor bureau said the local authorities had sent a team to the factory to listen to the workers’ complaints.

“The mood of the workforce has stabilized now, and they have gone back inside the factory gates,” the official said. “Our leaders and government officials are there too, dealing with the situation.”

According to Shen, many workers are owed overtime and severance pay under Chinese labor law. “Some people have been working here for more than a decade, and they should get severance, but they haven’t received it,” he said.

Alas, they won’t receive it because the money is all gone: a worker who gave only a nickname A Quan said the workers had realized something was amiss when they spotted the factory’s remaining management team selling off raw materials on the quiet.

“Somebody saw them, and grabbed them,” A Quan said. “They were selling off the raw materials so [we think] they definitely knew that the boss had already absconded.”

Workers have also marched to municipal government headquarters since their factory boss failed to appear at work on Thursday.

“We went to the Shenzhen municipal government from here in Bao’an,” Shen said. “We marched over there on foot; some people even fainted. By the time we arrived there, it was dark, and we didn’t manage to meet with anyone.”

What’s worse, there appears to have been massive fraud involved before the disappearance of the CEO who had a “full order book” before he left: “Shen said workers are highly suspicious of their boss’ motives for leaving, as the order book was full before his departure.”

“We were all doing overtime every day, and we had to work without a break,” Shen said. “[We think the overtime pay] is why the boss ran away; it had nothing to do with the health of the business.”

Sorry Shen, but it is precisely the health of the business why your boss deserted you with your unpaid wages.

Meanwhile, the government is quietly seeking to resolve this unpleasant situation doing what it does best: sweeping everything under the rug.

[Shen] said demonstrations by several hundred workers on Monday had prompted promises of a 2,000 yuan payout from the government, requiring a signature, for each worker, although many people are suspicious that this might mean renouncing any other claim on the company.

“They said they’d give us 2,000 yuan just so we have something to live on, but we don’t know how they will deal with the salary that is owed us,” Shen said.

“We had to sign for it and have our photo taken, like criminals, and they covered up the document that we were signing so we couldn’t see what it was,” he said, adding that most people had refused to sign.

According to workers, there is no sign that the factory is closing down. “The place is a mess, and the boss still has some containers parked there,” Shen said.

As RFA notes, “China has seen 1,723 industrial disputes since the beginning of the year, 267 of which have been clustered in the once-booming manufacturing regions of Guangdong, the Hong Kong-based China Labour Bulletin said.”

The ruling Chinese Communist Party-backed All-China Federation of Trade Unions (ACFTU) is charged with protecting workers’ rights, but independent labor groups and workers say it has a poor track record when it comes to negotiating with management and government officials.

Meanwhile, rights groups say police are increasingly employing criminal charges as a means of silencing peaceful activism on almost any topic. Because the last thing the Politburo wants is for China’s hundreds of millions of ever more unhappy workers is to realize that they are not alone, and that other are taking matters into their own hands as a result of a shift in leverage from employers to employees.

Authorities in Guangdong are currently holding independent labor activist Liu Shaming, 57, on suspicion of subversion after he campaigned for workers’ rights, his lawyer told RFA on Tuesday.

Lawyer Wu Kuiming said Liu’s detention on charges of “incitement to subvert state power” is the result of a top-down crackdown on non-government organizations (NGOs) in recent months.”

It’s partly because he was active in promoting labor rights … but also because he wrote a diary of his experience of the June 4, 1989 [massacre],” Wu told RFA.

Fellow labor activist Peng Jiayong said Liu had been denied visits from friends or lawyers in the first five months of his detention, and that the charges against him are likely to be a form of political revenge.

“Liu Shaming helped the workers to negotiate with the factory management successfully, so that they were awarded compensation,” Peng said. “Maybe somebody wants revenge.”

For now that may be working, however, as the following interactive map of all Chinese labor strikes since 2011 courtesy of the China Labor Bullettin shows, China’s worker anger is rapidly building: after virtually no strikes (just 121) in 2011, we have seen a surge in strike activity, which is set to double from the 1,000 in 2014 to just below 2,000 as of early November, and rising exponentially. 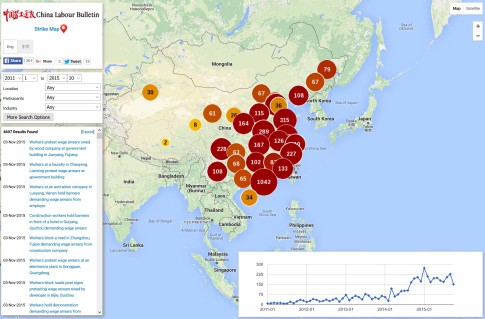