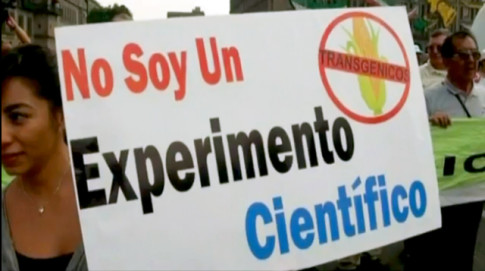 The federal judge, Benjamin Soto Sánchez, head of the second Unitarian Court in Civil and Administrative Matters of the First Circuit, upheld the provisional suspension that prohibits pertinent federal agencies from processing and granting the privilege of sowing or releasing into the environment of transgenic maize in the country. The federal suspension has been in force since September 2013 despite 100 challenges by transnational agribusiness interests and the federal government.

The attorneys for the defenders of maize also argued that, in the case of GM soybean crops in Yucatán, the Court should consider “that Mexico is a mega-diverse country.” The ‘center of origin’ argument is a significant departure from the approaches taken in other countries.

The “decision by Magistrate Soto Sánchez was issued today…within the appeals process that the community of citizens initiated this past August 19 after the Federal Judge Francisco Peñaloza Heras had refused to uphold the definitive suspension and two days later returned to temporarily suspend [GMO plantings] due to challenges by citizens.”

Judge Soto’s resolution “means the confirmation of suspending the planting of genetically modified corn stands until the court decides the ultimate appeal”, explained René Sánchez Galindo, lawyer for the Colectiva. Galindo explained how the argument of the federal court consisted of the principle that Mexican law requires that the courts preserve the subject of judgment during the appeal proceedings “since the damage would be irreversible if transgenic crops are sown”.

The demand for collective action against the planting of genetically modified corn was presented in July 2013 and together with judicial suspension has endured a hundred appeals by the federal Government and transnational corporations.

The press release further explains how the legal challenges against the citizens’ coalition have involved 22 amparo judgments, which have been resolved by 17 different federal courts and the first Chamber of the Supreme Court. In all these rulings, the judges determined the legality and importance of maintaining the precautionary principle and affirmed the need to avoid the planting of GM maize.

Lawyer Bernardo Bátiz, Advisor to the Colectiva, and a former attorney general for the Federal District, addressed the next big ruling will come on Wednesday by the Second Chamber of the Supreme Court, to resolve the matter of the beekeepers of the Yucatán peninsula against the planting of genetically modified soybeans. He urged that the court should consider “that we are a country of great biological, cultural, agricultural diversity and therefore planting GMO corn, soybeans, or other crops”.  He further noted that “in a country like ours, among other negative effects that would result, is that Mexican honey would be difficult to keep organic.”

The group fighting to uphold the GM maize ban, Acción Colectiva, is led by Father Miguel Concha of the Human Rights Center Fray Francisco de Vittoria; Victor Suarez of ANEC (National Association of Rural Commercialization Entertprises); Dr. Mercedes Lopéz of Vía Organica; and Adelita San Vicente, a teacher and member of Semillas de Vida, a national organization that has been involved in broad-based social action projects to protect Mexico’s extraordinary status as a major world center of food crop biodiversity and as the birthplace of the original varieties of maize.