Mexico’s Supreme Court last week supported rulings from March 2014 that blocked genetically modified (GM) soy from being grown in the Mexican sates of Yucatan and Campeche. The Supreme Court ruling means that Mayan communities in the area will be completely protected from GMO contamination in their honey production. 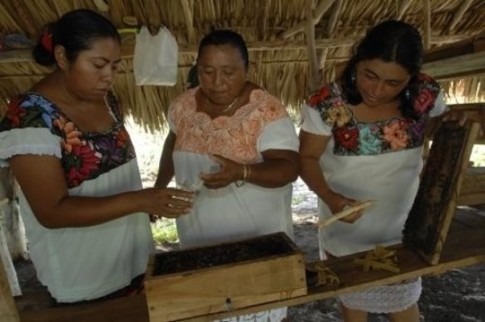 It was a very bad week for the Biotech industry in Mexico. On Wednesday Demanda Colectiva Maíz (Acción Colectiva), announced that opponents of genetically modified (GM) maize in Mexico also prevailed in an important new federal appeals court ruling.

On June 6, 2012, SAGARPA, backed by SEMARNAT (Mexico´s environment and natural resources department), granted a permit which allowed genetically modified soy (MON-04-032-6) tolerant of the herbicide glyphosate to be released to the environment in a commercial phase.

This permit granted the Monsanto Corporation permission to plant 253,000 hectares of GMO soy for an unlimited time in seven Mexican States, including the following municipalities of the State of Campeche: Champoton, Hecelchakan, Hopelchen, Tenabo, Calkini, Escarcega, Carmen, and Palizada.

In response to the permit, Mayan authorities of Pac-Chen and Cancabchen presented protection lawsuits (trials 753/2012 and 762/2012, respectively). Central arguments were: a) SEMARNAT and SAGARPA failed to carry out a free prior informed consultation of the Mayan people as specified by ILO´s Convention 169; b) planting genetically modified soy affected traditional Mayan beekeeping; c) excessive use of herbicides and related deforestation violated the right to a healthy environment.

1. The right to free prior informed consultation, protected by Article 2 of the Mexican Constitution and the International Labor Organization´s Convention 169 was violated, given that SAGARPA, upon granting the mentioned permit did not assure the indigenous communities of their right to decisions regarding their land and territory. SAGARPA did not establish a suitable mechanism which would consider culturally adequate procedures according to traditions and customs taking into account the Mayan people´s traditional methods of decision making. The District Judge determined that effective protection of recognized indigenous rights requires guaranteeing exercise of certain human rights of a procedural nature, principally regarding access to information, participation in decision making, and access to justice.”

2. Upon backing this permit, SEMARNAT´s Environmental Impact and Risk Directorate violated procedures established in its Internal Regulation, thus ignoring the binding opinions of CONABIO (National Commission for Knowledge and Use of Biodiversity), CONANP (National Commission of Natural Protected Areas), and INE (National Institute of Ecology) which advised against planting genetically modified soy in the polygons authorized. Thus, SEMARNAT had issued a favorable opinion without justification or foundation.

The 2014 ruling was then taken to Mexico’s Supreme Court, which totally supported the original ruling. The Supreme Court’s ruling has not yet been published in full.