– “It’s A Bloodbath” – Here Is The Biggest Casualty Of Canada’s Recession:

In the past year, we have extensively profiled the collapse of ground zero of Canada’s oil industry, Calgary, as a result of the plunge in the price of oil, in posts such as the following:

Since then it has only gotten worse for Canada, and as of two it culminated with the first official recession in 7 years. 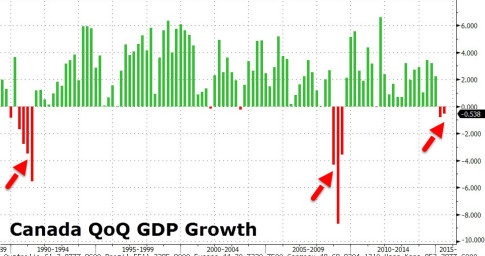 Additionally, in September we profiled the expected collapse of the Calgary commercial real estate market when we reported that in Alberta Canada now has 1.7 million square feet of empty office space, the most in North America, with another 5.2 million under construction! After years of booming construction, the natural resource rich country is starting to feel the pinch.

Overnight Bloomberg followed up on this stunning deterioration when it, too, reported that “office-tower owners in Canada’s energy hub are about to feel the full force of the oil-price crash.”

Using data from real estate brokers including Jones Lang LaSalle Inc. and Avison Young, Bloomberg calculates that vacancy is already at a five-year high in Calgary and rents are the lowest since 2006 after thousands of office jobs were cut. Energy company tenants have now begun to ask for rental relief and are offering subleases for as little as half the going rate.

The backlog is even worse: five new office towers with about 3.8 million square feet (353,031 square meters) of space hits the market in the next three years.

End result: if one ignores shadow vacancy rates, it is “only” as bad as 2010. If one adds shadow vacancy, or space leased but sitting empty, the rate jumps to 16%, the highest since the mid-1980s.

In downtown Calgary, the vacancy rate jumped to 14 percent in the third quarter, the highest since 2010 and compared with 5 percent for downtown Toronto, according to CBRE Group Inc. Companies are subleasing a record 2.7 million square feet, the brokerage said. That doesn’t include as much as 2 million square feet of so-called “shadow vacancy” or space leased but sitting empty, which would push vacancy to 16 percent, the most since the mid-1980s.

As for Canada in general, the vacany rate has already surpassed the 2009 highs. 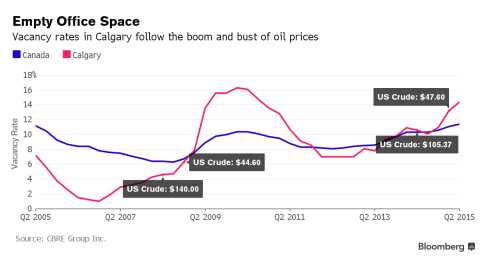 The following comment from Alexi Olcheski, an office-leasing principal at Avison Young from his office in downtown Calgary, says it all:
“It is a bloodbath. We’re at the highest point of fear and uncertainty now.”

The real estate mauling is impacting the public stocks of office REITs: “caught in the downturn are tower owners including Dream Office REIT, Artis REIT and Morguard Corp., whose shares have dropped about 27 percent, 14 percent and 5.1 percent respectively over the past 12 months. The Standard & Poor’s/TSX Capped REIT Index is down 8.7 percent over the same period compared with a 8.2 percent drop in the broad S&P/TSX Composite Index. U.S. crude has dropped more than half since its peak in June 2014 to hover around $45 a barrel.”

Some more examples of how the collapse in oil prices is spreading through the economy, which is on the verge of grinding to a halt:

Penn West Plaza, owned by developer Morguard, is among the buildings with empty floors. About 38 percent of its 621,628 square feet of office space is on the market for sublease, according to leasing documents. The going rate for the penthouse of the West tower is “negotiable” while occupancy is “immediate” for other floors, according to the ads. Morguard didn’t return phone calls and e-mails seeking comment.

Employment at Penn West Petroleum Ltd. shrank to less than 800 workers this year from about 2,250 three years ago. Athabasca Oil Corp., which eliminated more than 25 percent of its workforce last month, has been subleasing from Penn West and is also trying to find tenants to take some space off its hands, according to listings.

Even Calgary’s most iconic tower, completed just a few years ago, isn’t immune. The 58-story Bow, Canada’s second-largest office building at 2.0 million square feet, is owned by H&R REIT and leased until 2038 to Encana Corp., the real estate firm’s largest tenant by revenue. Encana subleases 1 million square feet to Cenovus Energy Inc., which in turn aims to vacate and sublease half of that, according to Reg Curren, a Cenovus spokesman. Together, the firms cut about 1,500 jobs this year, part of the 36,000 job losses at energy companies across Canada since the oil rout began.

Perhaps it is time for Canada to implement double seasonally-adjusted initial claims reports too and to pull a BLS, showing how despite reality, the job market is flying.

For now one thing is preventing an all out real-estate disaster: subleasing, but even that is at best cutting losses by half, with subleases done at 50% of the original cost. This had lead to rents dropping to C$20.75 a square foot in downtown Calgary, the lowest since at least 2006.

Subleasing is in overdrive and has helped buffer landlords from the impact of the oil slump. Avison Young’s Olcheski said he made his first quadruple sublease earlier this year, when a technology firm rented space from a company several leases removed from the main energy tenant.

But the subleases are being done at as little as 50 percent of the original cost, according to Damien Mills, executive vice president and managing director of Western Canada for JLL. Rents have dropped to C$20.75 a square foot in downtown Calgary, the lowest since at least 2006, according to the brokerage.

Which means one thing: more equity downside, and more layoffs: “Landlords now are forced to compete with somebody that’s looking for a very different return on their real estate cost,” Mills said. Some owners are already feeling the pain. Two-thirds of Dream Office’s space in Calgary expires in the years up to 2019 and only 13 percent has been picked up, according to company documents.

“With a smaller tenant size relative to most landlords, we believe this reduces leasing rollover risk as these tenants tend to be leaner, resulting in less headcount reductions during an economic downturn,” Rajeev Viswanathan, chief financial officer of Dream Office, said by e-mail. The company is also aggressively pursuing smaller tenants, he said.

But the worst news: another influx of soon to be completed office space means another 2 million square feet in rental availability are about to hit the market, sending rents to what may soon be record lows.

In addition to the current glut of space, five office towers — each with at least 430,000 square feet — are due for completion in the next three years in Calgary, some only 36 percent leased as of October.

Olcheski, who’s worked in Calgary for about 10 years, is trying to remain optimistic amid the uncertainty. It’s going to be his best year yet for leases to smaller, non-energy tenants, for example.

What happens then? Nobody knows, or rather, only god does: “God only knows what’ll happen if oil doesn’t rebound,” he said. “I try not to let that penetrate my mind” Olcheski concluded.