– Four US Firms With $4.8 Billion In Debt Warned This Week They May Default Any Minute:

The last 3 days have seen the biggest surge in US energy credit risk since December 2014, blasting back above 1000bps. This should not be a total surprise since underlying oil prices continue to languish in “not cash-flow positive” territory for many shale producers, but, as Bloomberg reports, the industry is bracing for a wave of failures as investors that were stung by bets on an improving market earlier this year try to stay away from the sector. “It’s been eerily silent,” in energy credit markets, warns one bond manager, “no one is putting up new capital here.” 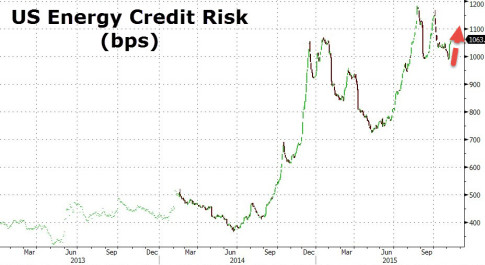 Eleven months of depressed oil prices are threatening to topple more companies in the energy industry. As Bloomberg details,

Four firms owing a combined $4.8 billion warned this week that they may be at the brink, with Penn Virginia Corp., Paragon Offshore Plc, Magnum Hunter Resources Corp. and Emerald Oil Inc. saying their auditors have expressed doubts that they can continue as going concerns. Falling oil prices are squeezing access to credit, they said. And everyone from Morgan Stanley to Goldman Sachs Group Inc. is predicting that energy prices won’t rebound anytime soon.

The industry is bracing for a wave of failures as investors that were stung by bets on an improving market earlier this year try to stay away from the sector. Barclays Plc analysts say that will cause the default rate among speculative-grade companies to double in the next year. Marathon Asset Management is predicting default rates among high-yield energy companies will balloon to as high as 25 percent cumulatively in the next two to three years if oil remains below $60 a barrel. 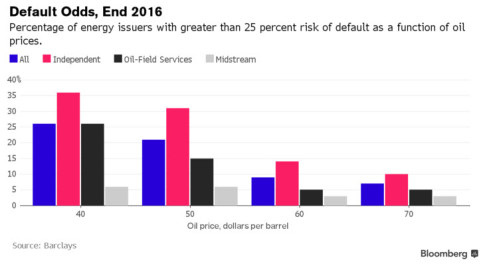 “No one is putting up new capital here,” said Bruce Richards, co-founder of Marathon, which manages $12.5 billion of assets. “It’s been eerily silent in the whole high-yield energy sector, including oil, gas, services and coal.”

That’s partly because investors who plowed about $14 billion into high-yield energy bonds sold in the past six months are sitting on about $2 billion of losses, according to data compiled by Bloomberg.

And the energy sector accounts for more than a quarter of high-yield bonds that are trading at distressed levels, according to data compiled by Bloomberg.

Barclays said in a Nov. 6 research note that the market is anticipating “a near-term wave of defaults” among energy companies. Those can’t be avoided unless commodity prices make “a very large” and “unexpected” resurgence.

“Everybody’s liquidity is worse than it was at this time last year,” said Jason Mudrick, founder of Mudrick Capital Management. “It’s a much more dire situation than it was 12 months ago.”