On Monday, President Obama signed a budget deal that raised the debt ceiling from $18.5 trillion to $20 trillion.

In theory, the debt ceiling limits how much money the U.S. government can borrow. The debt ceiling is now twice as high as it was when Obama took office in 2008.

Last week, Forbes reported the U.S. government has raised the debt ceiling 74 times since March 1962. The latest increase – number 75 – should help fund the government until March 2017 or so.

U.S. government debt has grown six-fold since 1990, or twice as fast as the U.S. economy. Government debt as a percentage of gross domestic product (GDP) is now 101%. That’s its highest level since World War II.

The U.S. is easily the largest debtor nation in the world…the total debt of all countries in the world is slightly over $61.2 trillion. The United States has 4.4% of the world’s population, generates 23.2% of global GDP, and owes nearly 30% of the total global debt.

With a debt of $18.3 trillion, the U.S. is the most indebted nation in the history of the world. This massive and unprecedented debt load is extremely dangerous. We believe it’s only a matter of time until it sparks the next financial crisis.

•  For now, the U.S. government can borrow money for next to nothing…

As Casey readers know, the Federal Reserve dropped its key rate to effectively zero in December 2008. Seven years of easy money has made it incredibly cheap for consumers, businesses, and the federal government to borrow money.

In other words, easy money policies have cut the government’s borrowing costs by more than half.

•  Like us, Marc Faber knows low rates are a major factor behind the huge growth in government debt…

Faber is one of the world’s most respected contrarian investors. He earned the nickname Dr. Doom after nailing several bearish calls. For one, he predicted 1987’s Black Monday, the worst day in the history of the U.S. stock market. Faber also predicted the Asian financial crisis of 1997-1998.

At our recent 2015 Casey Research Summit, Faber noted that rock-bottom rates have allowed the government to borrow ridiculous sums of money.

The debt since 1995 has gone up more than four times to now over $18 trillion, but the interest expense haven’t gone up because interest rates have been coming down…

The facts back Faber up…

The U.S. government’s debt has more than doubled over the past decade, from $7.3 trillion in 2004 to more than $18 trillion today. But due to low interest rates, the cost to service that debt has only gone up 34%.

Here’s Faber on stage at the Casey Research Summit, talking about where he’s investing his own money today.

If you missed the Summit, we put together an audio collection that includes every speech, panel, and Q&A session from the three-day event.

•  Moving along, Canada is a victim of crashing oil prices…

Last summer, the price of oil peaked at just over $106. Today, oil trades for about $48. That’s a 55% collapse in less than 17 months. Yet global oil production is still near its highest level in at least 25 years.

Canada is the world’s sixth-largest oil producer. Oil makes up 25% of its exports. So it’s no surprise that crashing oil prices have sent Canada’s economy into a recession. On top of that, the value of the Canadian dollar recently hit an 11-year low against the U.S. dollar.

Now, Canada’s job market is shrinking. The country’s latest jobs reports shows that Canada lost 58,600 jobs in August. That’s the most jobs Canada has lost in one month since 2009.

•  Money is fleeing Canada at an alarming rate…

Yesterday, Bloomberg Business said money is leaving Canada faster than anywhere else in the developed world (emphasis ours).

Canada’s basic balance — a measure of national accounts that spans everything from trade to financial-market flows — swung from a surplus of 4.2 percent of gross domestic product to a deficit of 7.9 percent in the 12 months ending in June…

Global investors are pulling money out of Canada. Even Canadian companies are investing less in their own country, as Bloomberg Business reported.

Canadian companies, meanwhile, have been looking abroad for acquisitions. Royal Bank of Canada on Monday closed its $5 billion purchase of Los Angeles-based City National Corp. Monday, its biggest-ever takeover. It’s part of a net outflow of C$73 billion this year for mergers and acquisitions, both completed and announced, according to Credit Suisse data.

We think Canada, especially Canadian oil country, is about to get a major wakeup call. Screaming high oil prices set off a 15-year economic expansion that barely paused in 2009. When the boom started, a barrel of oil cost $20. At its height the price was over $140. A decade and a half of boom times is enough to convince people tough times will never come back.

Doug and E.B. are in agreement that the price of oil will to stay low for months, if not years. This will cause a lot of pain for Canada and other countries that depend heavily on oil.

As Doug Casey explained in The Casey Report:

With the world’s economy (prominently including China) going into a deep downturn, and producers in the Middle East forced to “make it up on volume,” oil prices could go quite a bit lower. And economies like that of Alberta, Canada could collapse. It’s going to be a great opportunity to buy, and make a fortune. We will keep you advised.

In the meantime, Doug and E.B. have found a way to cash in on the global oil surplus. It’s a small company that pays a 13% annualized dividend. You can learn all about this opportunity by taking The Casey Report for a risk-free trial. Click here to learn more.

Chart of the Day

The U.S. government refuses to stop spending money it doesn’t have…

Today’s chart shows the difference between how much the U.S. government spends every year and how much it brings in.

As you can see, the government spends far more money than it takes in. In fact, it hasn’t had a budget surplus in fourteen years.

Every time the government spends a dollar it doesn’t have, it has to borrow. This is why, with a debt of $18.3 trillion, the U.S. government is now the most indebted government in history. 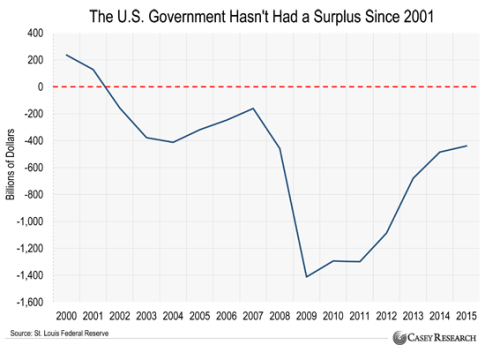