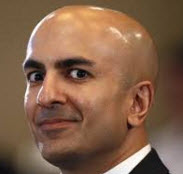 Having recently failed in his bid to be democratically-elected to California’s governorship, it appears former Treasury Bailout chief and PIMCO ‘equity’ portoflio manager, Neel Kashkari has been selected (not elected) as Minneapolis Fed’s next president, replacing the uber-dovish Kocherlakota starting January 1st.

He’ll succeed Narayana Kocherlakota, who leaves office at the end of the year. Mr. Kashkari, 42, is slated to take office on Jan. 1, 2016, the bank plans to announce Tuesday.

Mr. Kashkari’s views on central bank interest-rate policy are not publicly known. He’s not an economist, beginning his career as an aerospace engineer working on space missions before earning an M.B.A. at the University of Pennsylvania’s Wharton School. He’s an alumni of investment bank Goldman Sachs and investment fund Pacific Investment Management Co., or Pimco.

Mr. Kashkari rose to public prominence as a member of President George W. Bush’s administration by running the government’s $700 billion Troubled Asset Relief Program—a controversial effort aimed at stabilizing the financial system by pumping capital into banks during the 2008 financial crisis. Critics called the program an improper intrusion by the government into private enterprise and an unfair bailout of big banks.

Mr. Kashkari—taking a job that paid $339,000 a year, according to the Fed’s most recent annual report—said in an interview with the Wall Street Journal that his diverse resume provides a critical foundation for his new role. He also offered broad praise for how the Fed has conducted policy, even as he declined to offer his views about the monetary policy outlook.

The Fed’s regional banks “can be and should be some of the most important economic policy thought leaders in the country,” Mr. Kashkari said in the interview. He sees his new job as “a continuation of a lot of the policy work I’ve already done” in government and the private sector. He said he also sees the regional Fed banks as an antidote to the “group-think” that can take hold of Washington-based policy makers.

Now we are sure The Fed will not be politicized.

A Republican, Kashkari ran for Governor of California in the 2014 election, but failed to unseat incumbent Jerry Brown.

After the campaign, Kashkari published “Lessons from the Trail,” a firsthand account of what he learned from his gubernatorial campaign to be helpful to future candidates.

But who will forget his appearance at Congress…

“I’m just wondering how you feel about an AIG giving $503 million worth of bonuses on the one hand, and accepting $154 billion from hard-working taxpayers,” Cummings asked Kashkari.

“What really bothers me is all these other people who are lining up. They say, well, is Kashkari a chump?”

Some background reading on Mr. Kashkari…