Last week we reported that, as measured by its three primary means of transportation, global trade is in nothing short of freefall: to wit – “China Container Freight At Record Low; Rail Traffic Tumbles, Trucking Slows Down.” The slowdown in this most important metric of global growth (or lack thereof), one which unlike asset prices can not be manipulated by central banks through “printing” was confirmed when Maersk, the world’s biggest container shipping company, reported it would cut shore-side headcount by about 4,000, a reduction of about 17%.

As reader Joe points out, they also declined to execute options for additional 19,000 TEU mega ship new-builds and a couple of smaller 3,600 TEU feeder vessels, and will postpone a decision on building some large 14,000 TEU vessels. He adds that industry analysts have been critical of Maersk’s counter-intuitive expansion over the past few years in a recessionary climate, during which the container carriage capacity that Maersk brought on line is credited with driving ocean transport rates down.

It is unclear whether Maersk was able to capture additional market share with their larger and likely more efficient mega-ships by driving less efficient operators out of business, or if the recession killed off their competitors. What is certain is that Maersk’s pricing strategy merely accelerated the “deflationary” climate experienced across the globe over the past several years, as companies have rushed to cut prices in an attempt to put competitors (who have survived this far thanks to global ZIRP policies which have pushed debt to unprecedented levels around the globe) out of business.

What is also clear is that Maersk is not just making it up. In fact, according to Maersk CEO, Nils Smedegaard Andersen, the reason why companies that are reliant on global trade, such as his, are flailing is simple: global growth is substantially worse than the official numbers and forecasts. To wit: “The world’s economy is growing at a slower pace than the International Monetary Fund and other large forecasters are predicting.”

Quoted by Bloomberg, Andersen says that “we believe that global growth is slowing down,” he said in a phone interview. “Trade is currently significantly weaker than it normally would be under the growth forecasts we see.”

Impossible, you say, the IMF would never lie or be overly optimistic in a transparent attempt to boost consumer optimism, and thus spending. Actually, it would.

As Reuters recently pointed out, “the International Monetary Fund, World Bank and Organization for Economic Cooperation and Development have not just been wrong; for years they have all been wrong in the same direction, persistently forced to revise down predictions that proved too rosy. “There’s an inbuilt ‘optimism bias’,” said Stephen King, senior advisor to HSBC and a former economic adviser at the British treasury. “But facts have to dominate a forecast eventually.”

It’s worse than that, because after 7 years of screaming “recovery” nobody believes it anymore, and meanwhile for CEOs such as Andersen, the world is on the verge of a global recession.

The IMF on Oct. 6 lowered its 2015 global gross domestic product forecast to 3.1 percent from 3.3 percent previously, citing a slowdown in emerging markets driven by weak commodity prices. The Washington-based group also cut its 2016 forecast to 3.6 percent from 3.8 percent. But even the revised forecasts may be too optimistic, according to Andersen.

The punchline: “We conduct a string of our own macro-economic forecasts and we see less growth – particularly in developing nations, but perhaps also in Europe — than other people expect in 2015,” Andersen said. Also for 2016, “we’re a little bit more pessimistic than most forecasters.”

A little as in 0.2% or as in 2%, which would mean that the world GDP is currently, as we have long claimed, in a recession and not just in dollar terms. 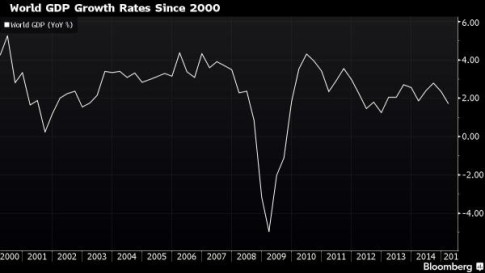 On second thought no need to wait for the answer: as noted above, Maersk’s on Friday reported a 61 percent slump in third-quarter profit as demand for ships to transport goods across the world hardly grew from a year earlier. The low growth rates are proving particularly painful for an industry that’s already struggling with excess capacity.

Here is the damage, as we showed last Thursday in a chart of China’s containerized freight index. As of the latest data point, it just hit an all time low! 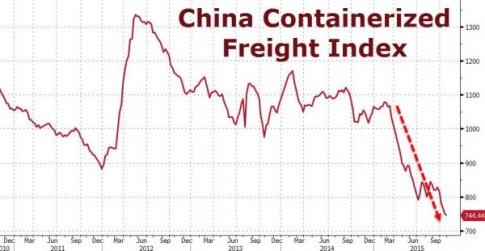 Trade from Asia to Europe has so far suffered most as a weaker euro makes it tougher for exporters like China to stay competitive, Andersen said. Still, there are no signs yet that the global economy is heading for a slump similar to one that followed the financial crisis of 2008, he said.

Still, despite the historic collapse in profit, the Maersk CEO remains optimistic:

“We’re seeing some distortions amid this redistribution that’s taking place between commodity exporting countries and commodity importing countries,” he said. “But this shouldn’t lead to an outright crisis. At this point in time, there are no grounds for seeing that happening.”

We are confident that Mr. Andersen will be the first to advice when said distortions do lead to an “outright crisis.”