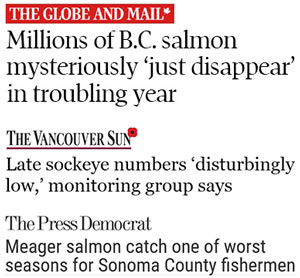 – Headline: “Millions of salmon mysteriously just disappear” off West Coast — Expert: “Literally within 2 days it disappeared, it just crashed… I have never ever seen, nor can I explain” that — “One of the worst seasons ever” — “Disturbing… Serious trouble… Very dramatic”:

The Globe and Mail, Nov 3, 2015 (emphasis added): Millions of B.C. salmon mysteriously ‘just disappear’ in troubling year… [There were] very poor returns on the Fraser River, where only about two million sockeye returned, far short of the more than six million predicted in preseason forecasts. Even more dramatic was the collapse of the pink salmon on the Fraser, with only about five million fish showing up when more than 14 million had been forecast… [Dr. Brian Riddell, president and CEO of the Pacific Salmon Foundation] said it is possible at this point to paint a broad picture, and the indication is that some stocks are in serious trouble. One mystery, he said, is what happened to all those pink salmon that were supposed to return to the Fraser River. Dr. Riddell said test fisheries in the Georgia Strait in the summer showed a strong run of pink salmon coming in, but then… the fish just stopped arriving… “We had roughly 40 per cent of the run in and it was on track with the curve, and then literally within two days it disappeared. It just crashed. … I have never ever seen, nor can I explain, a test fishery like that. The fish are coming in and you are following the proper pattern as they have for years and years, and then they suddenly just disappear. And we have not accounted for them.” He said millions of fish that should have been coming in the second half of the run just didn’t materialize.

Vancouver Sun, Nov 3, 2015: Late sockeye numbers ‘disturbingly low,’ monitoring group says; Pre-run estimate of 1.24 million dropped to 200,000 for entire Fraser River run… “it’s much more disappointing than people were hoping to see this year,” said Greg Taylor, senior fisheries adviser for the Watershed Watch Salmon Society… “They arrive in the spawning grounds in October, and the numbers they’re seeing are disturbingly low.” Taylor noted that the Pacific Salmon Commission’s (PSC) pre-run estimate of 1.24 million late-run salmon was dropped to 200,000 for the entire Fraser River run… “It’s a very dramatic reduction.”… Taylor noted that this is the second year in a row that both the early summer and late summer components of Shuswap sockeye returned at levels well below pre-season expectations. “They join many other Thompson salmon stocks, including coho, chinook, and steelhead, that have struggled in recent years.”

Press Democrat, Sep 21, 2015: Meager salmon catch one of worst seasons for Sonoma County fishermen… one of the worst king salmon seasons in memory. Some Bodega Bay-based anglers gave up rather than scramble for meager catches of underweight and undersized salmon… the season is a bust… “It’s just not worth it,” said Chris Lawson, a 40-year fishing veteran, who said he quit going out for salmon in mid-July… Lawson called it “one of the worst seasons ever.”… Anglers are wondering what happened to the 650,000 king salmon said to be in the ocean off the North Coast this year… Lawson called 2015 one of the worst in his 40 years of salmon fishing.