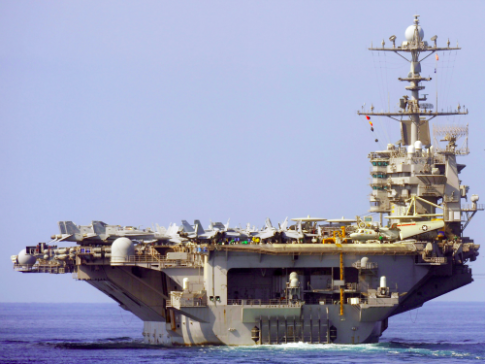 – Why the US Navy Is Going to Be Destroyed in the Next Global War:

As the Naval forces of the United States and China continue to play tit for tat in the South China Sea, we have to consider the possible results of these maneuvers. There are at least two sides to every war, and obviously, only one can be the winner. In this case however, both sides clearly think they can win, or else they wouldn’t be challenging each other on the open seas.

Most people would probably assume that China’s navy would be no match for America’s high-tech war machine, but there are a few experts who would beg to differ. According to a recent report from a defense think tank, our aircraft carriers, the most crucial and expensive cornerstone of America’s conventional military, may be its weakest link.

The Pentagon’s focus on developing a “jack of all trades, master of none” aircraft, while rival countries build technology capable of sinking American carriers, could make these expensive warships ineffective in the coming years, according to the naval expert who authored the report.

The rise of new powers now threatens to push the Navy farther from shore and beyond the range of the aircraft the carriers hold, according to the report written by naval expert Jerry Hendrix of the Center for New American Security. “This push back would limit the service’s ability to project power and thus undermine the credibility of the United States.”

The U.S. carrier fleet and its air wings, or the aircraft on board, have been considered the foundation of American naval power since the end of World War II.

Over the last 70 years, the Pentagon has expanded and upgraded its fleet of aircraft carriers and the planes they carry; the staggering sums involved — each carrier costs roughly $12 billion — has been an investment that has allowed the U.S. Navy to project a consistent, military presence across the globe.

But the report charges that a misguided decision over the past 20 years to prioritize short-range, light attack aircraft — rather than those with deep-strike capabilities and longer range — coupled with the development of new, anti-ship missile technology by several unfriendly nations, jeopardizes the safety of the American vessels.

The report argues that since the US Navy hasn’t squared off against any opposing naval force in over 70 years, they’ve grown complacent to the realities of modern warfare. On the other hand, simply changing the aircraft that we use might not be enough. Those aforementioned anti-ship missiles are probably more than capable of completely obliterating our ships, regardless of what kind of aircraft they carry.

Countries like China and Russia have put a ton of research into anti-ship missile technology, because they provide the most bang for their buck. They know that they can’t outspend our military and build a bunch of aircraft carriers, so these missiles have long been the perfect solution to America’s military prowess. It only takes one or two of them to sink a ship, and you can manufacture thousands of them for the cost of a single aircraft carrier.

While it’s hard to say for sure what would happen if our ships ever encountered these missiles, most would argue that our navy’s defense systems could easily counter them, including the most modern and advanced missiles. That’s a reasonable assessment, but again, these missiles are relatively cheap and nations like China can manufacture thousands of them. Our ships will be able to counter two or three of them, but if dozens or even hundreds of them are launched all at once, they could easily put our navy at the bottom of the ocean.

In other words, our navy has a much bigger problem. Just as the aircraft carrier made the battleship largely obsolete after World War Two, the anti-ship missile has made the aircraft carrier obsolete for conventional warfare. Couple that with the fact that both Russia and China have submarines that are so stealthy our ships can’t really detect them, and you’ve got a recipe for total and utter defeat if our nation ever goes to war with these countries.

And honestly, powerful nations like China and Russia aren’t the only major threats to our navy. When we tried to run a simulated wargame in the Persian Gulf back in 2002, the opposition force (which represented Iran) was able to completely destroy our Navy with a few unconventional tactics. Aside from our dismal quagmire in Iraq, that wargame was probably the single biggest reason why the Bush regime never got around to invading Iran. They knew it would have been suicide.

I don’t think anybody doubts that our navy is the most formidable in the world, and that includes Russia and China. However, the war hawks in Washington need to be reminded that our military is far from invincible. Unfortunately, it’s a lesson they’ve forgotten countless times before.