And Mike Krieger should better inform himself about the damages caused by vaccines, especially because of his newborn son. 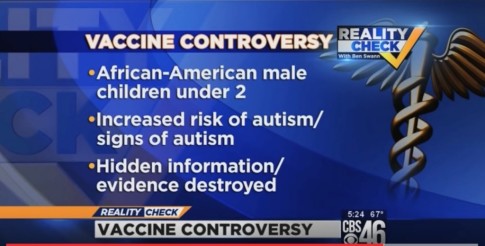 I want to start off this post by making it clear that I’m not remotely anti-vaccine. Personally, I chose to receive a Hepatitis A shot prior to my Asia travels last winter, and I also recently received a TDAP booster in order to reduce the risk of transferring pertussis to my newborn son, which can be quite dangerous if contracted by babies.

While I’m not anti-vaccine, I am anti-ignorance, and there’s a lot of ignorance and bluster out there when it comes to this subject. I know this, because I spent a lot of time researching the topic over the past nine months, after finding out that my wife was pregnant. It’s a complicated topic, which is why this is the first time I’ve ever written about it.

I came to realize that what Robert F. Kennedy, Jr. wrote in an Alternet article earlier this year is undoubtably true. He noted:

Vaccines are big business. Pharma is a trillion dollar industry  (1) with vaccines accounting for $25 billion in annual sales. (2) CDC’s decision to add a vaccine to the schedule can guarantee its manufacturer millions of customers and billions in revenue (3) with minimal advertising or marketing costs and complete immunity from lawsuits. High stakes and the seamless marriage between Big Pharma and government agencies have spawned an opaque and crooked regulatory system. Merck, one of America’s leading vaccine outfits, is currently under criminal investigation for fraudulently deceiving FDA regulators about the effectiveness of its MMR vaccine. Two whistleblowers say Merck ginned up sham studies to maintain Merck’s MMR monopoly. (4)

Big money has fueled the exponential expansion of CDC’s vaccine schedule since 1988, when Congress’ grant of immunity from lawsuits (5) suddenly transformed vaccines into paydirt. CDC recommended five pediatric vaccines when I was a boy in 1954. Today’s children cannot attend school without at least 56 doses of 14 vaccines by the time they’re 18. (6)

An insatiable pharmaceutical industry has 271 new vaccines under development in CDC’s bureaucratic pipeline (7) in hopes of boosting vaccine revenues to $100 billion by 2025. (8)The industry’s principle spokesperson, Dr. Paul Offit, says that he believes children can take as many as 10,000 vaccines. (9)

Big Pharma is among the nation’s largest political donors giving $31 million last year to national political candidates. (37) It spends more on political lobbying than any other industry, $3.0 billion from 1998 to 2014 (38) – double the amount spent by oil and gas and four times as much as defense and aerospace lobbyists. (39) By February, state legislators in 36 states were pushing through over one hundred new laws to end philosophical and religious vaccine exemptions. Many of those state lawmakers are also on the industry payroll. (40) You can see how much money bill sponsors from your state took from Big Pharma on http://www.maplight.org.

Normally plaintiffs’ tort lawyers would provide a powerful check and balance to keep vaccines safe and effective and regulators and policymakers honest. But Pharma’s dirty money has brought the industry immunity from lawsuits for vaccine injury no matter how dangerous the product. An obliging Congress disposed of the Seventh Amendment right to jury trial making it impossible for vaccine injured plaintiffs to sue pharmaceutical companies for selling unsafe vaccines. (41) That’s right! No Class Actions. No discovery. No depositions and little financial incentive for the industry to make vaccines safer.

To educate yourselves about CDC corruption and the truth about vaccine science, download the movie Trace Amounts (43) and insist your legislators watch it before voting on any of these bills.

Indeed, what greater captive audience is there than parents trying to protect their children from disease. Unfortunately, what this has led to is a vaccine schedule that in some very obvious ways defies all common sense and logic. For example, the CDC recommends all newborns receive a Hepatitis B vaccine within days of birth, whether or not the mother has Hep B. In case you’re unaware, Hep B is a sexually transmitted disease, yet the CDC is suggesting parents inject a newborn to protect against it. This is certifiably insane.

Now I’m not implying Hep B vaccines lead to autism, death or anything else. What I am saying is that this is a pointless exercise that benefits only one party in a material way. The vaccine manufacturer.

Moving along, perhaps the most controversial of all the vaccines is the Measles, Mumps and Rubella shot, or MMR. This is the one that many “anti-vaxxers” link to autism, but that others claim is merely a coincidence since MMR is given between one and two years of age, which is around the same development stage where autism becomes noticeable or diagnosable. However, what is noteworthy, is that CDC veteran Dr. William Thomson claims the agency destroyed documents showing some statistically significant linkage. From the same article by Robert F. Kennedy Jr.:

The corruption has also poisoned CDC’s immunization safety office, the research arm that tests vaccines for safety and efficacy. In August 2014, seventeen year CDC veteran, Dr. William Thompson, who is author of the principal study cited by CDC to exculpate mercury preserved vaccines from the autism link, invoked whistleblower protection, and turned extensive agency files over to Congress. (20) Thompson, who is still employed at CDC, says that for the past decade his superiors have pressured him and his fellow scientists to lie and manipulate data about the safety of the mercury based preservative, thimerosal, to conceal its causative link to a suite of brain injuries, including autism. (21) (22)

While this isn’t new information, what is notable is that it was recently covered by Ben Swan on CBS News. Watch the segment below:

A Father’s Personal Struggle with the Vaccine Debate