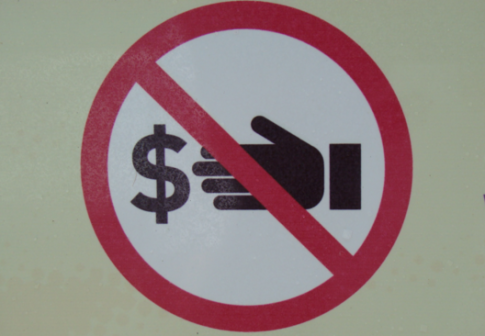 As central planners the world over grapple with the effective “lower bound” that’s imposed by the existence of physical banknotes, there’s been no shortage of calls for a ban on cash.

Put simply, if you eliminate physical currency, you also eliminate the idea of a floor for depo rates.

After all, if people can’t withdraw paper money and stash it under the mattress, then interest rates can be as negative as the government wants them to be in order to “encourage” consumption. If, for instance, you’re being charged 10% for saving your money, then by God you will probably spend that money rather than see the bank collect a double-digit fee just for holding on to your paycheck.

In the absence of physical cash, there’s no way for depositors to avoid that rather unpalatable outcome unless the public starts buying hard assets like commodities with their debit cards. If you think that sounds far-fetched, just consider the fact that everyone from Citi’s Willem Buiter to economist Ken Rogoff to the German Council Of Economic Experts’ Peter Bofinger have now floated the idea.

“With today’s technical possibilities, coins and notes are in fact an anachronism,” Bofinger told Spiegel back in May.

Now, in what should be a wake up call to the world, Bank of Ireland has banned branch withdrawals of less than €700.

Here’s The Irish Times explaining that tellers will still assist the “elderly” if they have trouble using automated methods of obtaining cash:

Under new rules, designed to streamline in-branch services, Bank of Ireland said withdrawals of less than €700 will no longer be facilitated with the assistance of tellers.

From mid-November, customers will have to use ATMs or mobile devices for small and modest-sized withdrawals.

Lodgements of up to €3,000 and those involving less than 15 cheques will also have to use the bank’s dedicated lodgement ATMs.

“Bank of Ireland understands these changes may be a new way of banking for some of our customers, and the branch teams will be available to help and guide them through this change,” the bank said in a statement.

So, if you are, i) wanting less than €700, ii) have less than 15 checks to deposit, or iii) aren’t looking to put at least €3,000 into your account, you are no longer welcome inside Bank of Ireland branches.

For his part, Irish Finance Minister Michael Noonan seems to think that this is, for lack of a better description, absolutely nuts:

Minister for Finance Michael Noonan has described restrictions to be imposed by Bank of Ireland on over-the-counter lodgements and withdrawals as both “surprising and unnecessary”.

“I expect the bank to fully honour this commitment and ensure that customers will be facilitated through the existing arrangements where required. I would welcome a clarification form Bank of Ireland on the issue,” he said in a statement.

Yes, Noonan is demanding some “clarification,” and you should too, before you discover that the world’s central bankers planners have absconded with your physical cash on the way to instituting a regime that will allow for the micromanagement of your purchasing decisions.

1 thought on “This Should Be A Wake Up Call To The World: Bank Of Ireland Bans Cash Withdrawals Of Less Than €700 At Branches”