– US Spec Ops Already On The Ground In Syria Sources Say, As Russian Troop Presence Grows To 4,000:

On Tuesday evening, we noted that the US is set to send F-15C Eagle twin-engine fighters to Incirlik. This suggests that the Pentagon is preparing for air-to-air combat with the Russians.

As hyperbolic as that might sound, there’s really no alternative explanation for why Washington would send the fighters to Syria unless of course ISIS and/or the mishmash of rebels and militants fighting for control of the country have air forces no one has ever heard about.

Indeed, Russia made a similar move by sending Sukhoi Su-30s to Latakia and according to several sources, those planes had a run-in with Israeli jets over Lebanon last month.

The interesting thing, from our perspective anyway, is that Lebanese sources were out on Wednesday claiming that US spec ops are already on the ground – and they’re operating in the west. Here’s Sputnik:

US military advisors are alleged to have started training so-called moderate rebels near the city of Salma in the Latakia province in what amounts to breaking a pledge not to put US boots on the ground in Syria, Lebanon’s satellite television channel al-Mayadeen reported, citing an unnamed military source. 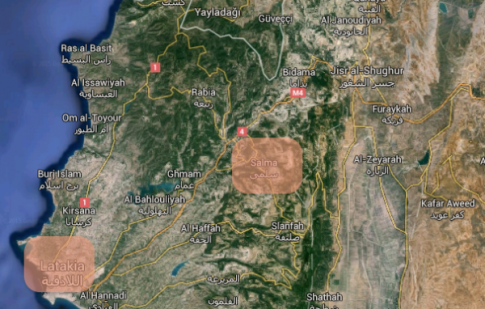 Now bear in mind, this is Russian media citing an unnamed Lebanese source, so that would be a bit like American media citing an unnamed Saudi correspondent, but still, even the suggestion that Washington has placed “advisers” in Salma is alarming. That is, the going assumption was that these spec ops forces would be placed with the YPG or somewhere near Raqqa to avoid even the appearance that The Pentagon is set to place troops with soldiers that are in direct contact with Iranian ground forces and as such could potentially get hit with Russian airstrikes.

Of course we won’t get much in the way of clarity from Washington. US Assistant Secretary for Near Eastern Affairs Anne Patterson told the House Foreign Affairs Committee on Wednesday that the “the activities and location of the special forces are classified.” Patterson also said that “Russia’s military intervention has dangerously exacerbated an already complex environment,” on the way to claiming that “the opposition puts up a very strong fight.”

Obviously, it’s difficult to know where even to start in terms of analyzing that bit of nonsense. First, the situation is indeed “already complex” thanks to Washington, Riyadh, Ankara, and Doha who collectiively decided that “start civil war via the funding of terrorists” was the proper “strategy” for bringing about regime change in Damascus. Second, it’s not clear that the “opposition” is putting up a “very strong fight,” and even if it were, that’s at least partly attributable to the Pentagon handing rebels things like anti-tank weapons. If Patterson thinks that’s constructive, well, maybe she needs to find a new occupation.

Meanwhile, Western media reports indicate that there are as many as 4,000 Russian troops in Syria (so, i) just “slightly” more than the 50 Obama is sending, ii) far less than the number of militants the US and its regional allies have trained, and iii) far less than the Iranian contingent, which, between Shiite militas from Iraq, Hezbollah, and the Quds, probably number more than 10 or 15,000). Here’s Reuters:

Moscow’s military force in Syria has grown to about 4,000 personnel, but this and more than a month of Russian air strikes have not led to pro-government forces making significant territorial gains, U.S. security officials and independent experts said.

Moscow, which has maintained a military presence in Syria for decades as an ally of the ruling Assad family, had an estimated 2,000 personnel in the country when it began air strikes on Sept. 30. The Russian force has since roughly doubled and the number of bases it is using has grown, U.S. security officials said.

The Russians have suffered combat casualties, including deaths, said three U.S. security officials familiar with U.S. intelligence reporting, adding that they did not know the exact numbers.

Russia’s foreign ministry declined to comment on the size of the Russian contingent in Syria or any casualties it has suffered. It referred questions to the Russian Defense Ministry, which did not respond to written questions submitted by Reuters.

A U.S. defense official said Russian aircraft are now operating out of four bases, but multiple rocket launcher crews and long-range artillery batteries are deployed outside the facilities.

“They have a lot of people outside the wire,” he said.

The main Russian base is at the Bassel al-Assad International Airport near the port city of Latakia. All of Moscow’s fixed wing aircraft are flying from there in support of ground offensives by the Syrian army and foreign Shiite militias, the defense official said.

Three other bases – Hama, Sharyat and Tiyas – are being used for helicopter gunships, he said. The Russians began operating from Tiyas only this week, the official said.

In a testament to what we said above, Reuters goes on to note that the rebels’ ability to fight off pro-regime forces stems largely from the delivery of U.S.-made TOW anti-tank missiles. Saudi Arabia is supplying them to forces battling Iran near Aleppo:

Despite the Russian air strikes, the offensives have failed to make significant advances, the U.S. officials and independent experts said. A key factor appears to be significant losses by pro-government forces of tanks and other armored vehicles to U.S.-made TOW anti-tank missiles that Saudi Arabia has been supplying to the anti-Assad rebels.

Once again, this is just about the silliest damn thing imaginable. Here’s Riyadh giving US-made anti-tank missiles to anti-Assad forces who are using them to target the very same Iran-backed militias who are driving Abrams tanks in Iraq and helping the US-trained Iraqi regulars battle ISIS. Clearly, Washington has gotten itself so intertwined in the Sunni-Shiite battle between Iran and Saudi Arabia that the Pentagon no longer knows what to do, leading to a schizophrenic strategy that varies by country.

In any event, the takeaway here is that reports now suggest US troops are operating near Latakia and that means they’ll be in contact with Iranian ground troops, Russian fighter jets, and quite possibly with some of the 4,000 Russian troops stationed in the country. Perhaps now we know why The Pentagon sent the F-15C Eagles. Maybe US spec ops will indeed be engaging the Russians and Iranians on the ground and will need the air force to shoot down Moscow’s warplanes in the event they try to hit US positions.

2 thoughts on “US Spec Ops Already On The Ground In Syria Sources Say, As Russian Troop Presence Grows To 4,000”