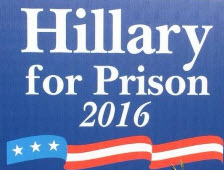 The real interesting part of the latest Quinnipiac University National Poll, is not the fact that 60% of Americans think Hillary Clinton is dishonest, but that 40% of Americans don’t.

You’d truly have to be a certified zombie, or living your life entirely under a rock, to not recognize how completely shady and corrupt this woman is. Fear not, I’ll provide a plethora of links at the end of this post, but here’s a recent example that went completely under the radar.

In a desperate attempt to appear populist, Clinton tweeted the following last week:

She tweeted that, seemingly completely unconcerned that any of her lobotomized followers would ever connect the dots to this story, which I highlighted over the summer: How Progressive – Private Prison Company Lobbyists are Raising Funds for Hillary. Here’s an excerpt:

As immigration and incarceration issues become central to the 2016 presidential campaign, lobbyists for two major prison companies are serving as top fundraisers for Hillary Clinton.

Corrections Corporation of America and the Geo Group could both see their fortunes turning if there are fewer people to lock up in the future.

Richard Sullivan, of the lobbying firm Capitol Counsel, is a bundler for the Clinton campaign, bringing in $44,859 in contributions in a few short months. Sullivan is also a registered lobbyist for the Geo Group, a company that operates a number of jails, including immigrant detention centers, for profit.

Moving along, at least 60% of Americans get the joke. From Quinnipiac:

Clinton is deemed less trustworthy than Donald Trump, which is a remarkably achievement.

Carson gets the best honesty grades among top candidates, a positive 62 – 24 percent.

Fascinating. So how does he do head to head against Clinton?

One year before Election Day 2016, Dr. Ben Carson is virtually tied with Donald Trump as strong front-runners for the Republican nomination, and Carson tops former Secretary of State Hillary Clinton 50 – 40 percent in the final face-off, according to a Quinnipiac University National poll released today.

Clinton’s traditional lead among women evaporates as American voters pick Carson over the Democrat 50 – 40 percent. Women go 45 percent for Carson and 44 percent for Clinton, while men back the Republican 55 – 35 percent.

The pantsuit revolutionary certainly must be squirming when confronted with those sobering numbers.

Nevertheless, despite blatant dishonestly and shadiness permeating from Clinton’s every pore…

Only 8 percent of Democrats say they “would definitely not support” Clinton.

Brilliant. These people simply ignore reality in favor of some imagined existential battle with Republicans. They brush off facts, such as the following, pointed out by the National Journal:

Con­gres­sion­al in­vest­ig­at­ors un­covered evid­ence that Clin­ton knew with­in hours that ter­ror­ists were be­hind the raid. Ac­cord­ing to the fath­er of a former Navy SEAL who died in the raid, Clin­ton stood be­fore his son’s coffin and privately told himthe United States would ar­rest the film­maker re­spons­ible for the at­tack.

Clin­ton has apo­lo­gized for put­ting all her of­fi­cial email on a private serv­er but con­tin­ues to claim incor­rectly that the ac­tions had pre­ced­ent and were au­thor­ized. She vowed in March that no classified ma­ter­i­al was ever on the serv­er, a claim proven false. She now tells voters none of the emails were marked clas­si­fied, which she must know is ir­rel­ev­ant; people are pro­sec­uted for mis­hand­ling un­marked U.S. secrets.

Fur­ther­more, Clin­ton in­sists that she vol­un­tar­ily turned over the email to the State De­part­ment, though in fact, she had kept the gov­ern­ment doc­u­ments secret un­til Con­gress dis­covered her stash. She in­sists she vol­un­tar­ily turned over the serv­er, fail­ing to men­tion the FBI’s strong de­sire to scour the stor­age unit as part of its on­go­ing in­vest­ig­a­tion of her ac­tions.

Of course, that’s just the tip of the iceberg.

How the Clinton Foundation Paid Sidney Blumenthal $10K per Month as He Gave Horrible Libya Advice to the State Dept.

Arizona State Hikes Tuition Dramatically, Yet Pays the Clintons $500,000 to Make an Appearance