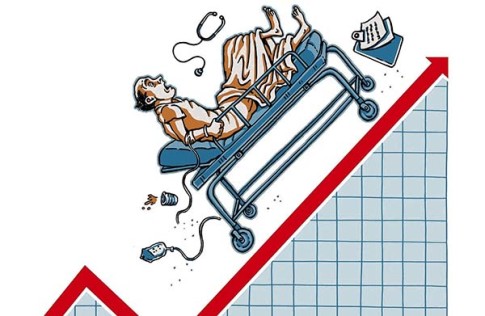 – Your Health Insurance Premiums Are About To Go Through The Roof -The Stunning Reason Why:

After years of delays and failed launches, Obamacare has finally taken hold, and with it the economic and financial implications from this mandatory tax are finally being felt.

We have extensively covered how Obama’s Affordable Care Act will end up being a failure,  observing both the economic implications in “In Latest Obamacare Fiasco, Most Low-Income Workers Can’t Afford “Affordable Care Act” as well as its operational shortcomings in “Obamacare Is A Disaster: Co-Op Insurers Across America Are Collapsing, And Now There Is Fraud“, paradoxically even as Obamacare – a tax – was according to the BEA the single biggest contributor to GDP growth in the third quarter.

Of course, the most obvious reason why Obamacare will have a dire impact the economy is also very simple: soaring healthcare premiums, also covered before… 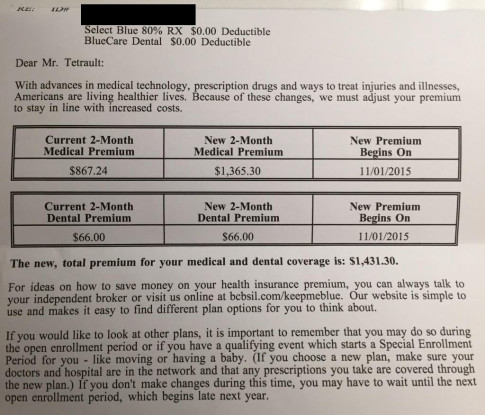 … which incidentally also explain why all those touted “gas savings” failed to materialize in discretionary spending behavior: all of the “saved” money went to cover rising health insurance costs.

None of this should come as a surprise.

What should, however, is that according to a very unexpected twist healthcare premiums are about to soar so much in the coming months that the shocking increases of the past year will seem like a walk in the park.

The reason for this comes courtesy of a new report from the WSJ which explains something few if any had expected: corporate insurers are scrambling to profit from Obamacare!

Yes, we know: Obamacare was written by the health insurance companies, and it was supposed to benefit them first and foremost as US households struggled to catch up to what most rational observers had said would be surging premiums. And, on the top line, it did just that: “under the ACA, insurers have seen an influx of new membership in individual plans and in Medicaid plans they administer for the government, expanding the industry’s total U.S. revenue to $743 billion in 2014, the year the law’s biggest changes took effect, from $641 billion the year before, according to a new analysis by consulting firm McKinsey & Co.”

So far so good, and just as expected – incidentally, that 16% increase in industry revenue comes right out of your pocket, dear U.S. reader with the blessings of the US Supreme Court of course.

But where it gets fascinating is that while the surge in the top-line was expected, what comes as close to a black swan as possible, is what happens below the revenue line on the insurers’ income statement.

The stunning finding comes from a new analysis by McKinsey which notes that much of that revenue growth has been unprofitable! Health insurers lost a total of $2.5 billion, or on average $163 per consumer enrolled, in the individual market in 2014, McKinsey found. A number are also expecting to lose money on their marketplace business for 2015. 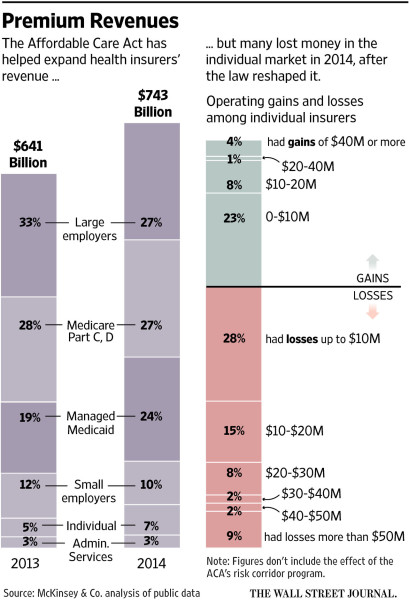 Shouldn’t all the benefits courtesy of the Obamacare tax flow through largely unobstructed to the bottom line? The answer, it appears, is no.

At big insurer Aetna Inc., the evidence of the law’s impact could be spotted last month in a Phoenix classroom, where Aetna was training a class of customer-service hires who will support a suite of re-engineered ACA marketplace plans dubbed “Leap.” Those products will have a different service approach, with fewer automated phone prompts and a completely new staff that is supposed to spend more time solving customers’ problems.

A trainee stood at a whiteboard, drawing stick figures with speech bubbles in a Pictionary-style game. “Conversation?” asked a class member. “Transition of care?” ventured another. The teacher gave the answer: The new reps had to keep commitments to consumers. That meant calling them back if needed.

With its Leap plans, Aetna is using many of the approaches that are gaining momentum in the industry. The Leap plans, which will roll out in four states this fall but are expected to be more widely available next year, rest on different technology than other Aetna products, including a new claims-processing platform, the company says.

“It’s a mammoth change in the offering, with everything being brand-new,” said Dijuana Lewis, an Aetna executive vice president. Aetna said this week it would likely lose money in 2015 on its exchange business.

The Leap insurance will include limited networks: In Arizona, it will be built around just one provider, the large Banner Health system. The Leap plans also aim to be easy to understand. For instance, they generally won’t include coinsurance, in which a consumer pays a percentage of the cost of a medical service, a concept many people find confusing.

And, as we now learn, all these changes and all this “simplification” will cost lots of money. In fact more money, than the tax actually brings in for most.

It appears that while US health insurers had modeled out their spike in revenue courtesy of Obamacare, not even they anticipated the associated costs the “Affordable” Care Act would entail.

That, however, is amazing, because while everyone else was worse off as a result of Obamacare, at least the conventional wisdom was that the insurers would make off like bandits. Not only is that not the case, but Obamacare – in a glorious example of how government meddling destroys everything – is actually leading to reduces profit margins for the one group that was supposed to be a sure winner!

However, since it is too late to undo Obamacare, what do these latest revelations mean?  According to the WSJ “now, a lot of insurers are recalibrating their approach for 2016, with changes visible at all levels of the industry—from pricing to product design.”

The WSJ reminds us that “premiums for a type of plan that is closely watched as a signal of consumer costs—the second-lowest-priced insurance product in the law’s “silver” metal tier—will increase 7.5% on average across the roughly three dozen states that rely on the HealthCare.gov marketplace, according to the administration.”

For larger companies, the losses were survivable. But rate increases create a risk that consumers may get sticker shock despite the availability of federal subsidies that reduce the cost sharply for many.

Peter Wainwright, 63 years old, who retired from a telecommunications job, currently has a plan bought on California’s ACA marketplace. He and his wife don’t get a subsidy and pay about $2,230 a month, and the rate is increasing for 2016. “Everything has gone up,” said Mr. Wainwright, of Half Moon Bay, Calif.

The health law remade the individual market, forcing insurers to sell plans to all consumers and banning them from charging rates based on health conditions. Insurers struggled to predict their costs, and many didn’t set rates high enough to cover the care of those they enrolled.

And since the insurers care far more about boosting profits than merely rising revenues which are more than offset by rising costs, and since most insurers are losing money on existing plans, expect all the rate increases incurred so far to be a mere walk in the park compared to the stratospheric premium surges that are about to be unveiled and that would make even the infamous Martin Shkreli green with envy.