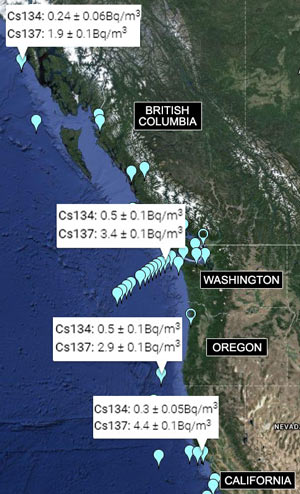 Woods Hole Oceanographic Institution: In the aftermath of the 2011 tsunami off Japan, the Fukushima Dai-ichi Nuclear Power Plant released cesium-134 and other radioactive elements into the ocean at unprecedented levels. Since then, the radioactive plume has traveled west across the Pacific… any cesium-134 detected in the ocean today must have come from Fukushima… We expect samples from the surface waters of the western Pacific that have not been contaminated by the Fukushima source to have 137Cs activity of between 1 and 2 Bq/m3 and for 134Cs to be “below detection.”