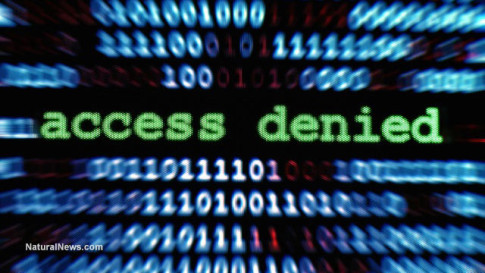 – Google and YouTube now engaging in wholesale censorship of content they don’t want the public to see:

“Take your pills and don’t ask questions. Drink the sweet wine of entertainment we have given you. Don’t think for yourself: just believe. The truth will no longer be published unless we allow it to be.”

Google, and its popular video sharing platform YouTube, are quickly becoming purveyors of propaganda, censoring material that could expose and question the status quo. These popular internet platforms are following in the footsteps of oppressive government regimes that punish whistle blowers and go after anyone who asks questions, seeks answers and reports on the most atrocious abuses of the day.

Recent “changes” at YouTube now allow their technocratic management to remove monetization from videos they don’t want people to hear or see. Independent media source, All News Pipeline, has had to appeal eight videos that were stripped of monetization for censorship reasons.

We are Change also revealed how they were being censored in March 2015. “In the last few days we noticed our YouTube numbers take a massive down turn while the majority of our new videos and top videos have been demonetized with no explanation at all. We looked at our website and social media numbers and they were better than ever but for some reason — our YouTube channel took a massive hit.”

Tom Lupshu of the Bunker Report has published a video commentary explaining how YouTube first started removing monetization from his videos. His truthful, down-to-earth videos, which are great learning tools, have even been deleted by YouTube.

Upon further investigation, YouTube’s policy change openly admits that videos will be taken down if they contain “controversial or sensitive subjects and events including subjects related to war, political conflicts, natural disasters, and tragedies, even if graphic imagery is not shown.”

This means that videos will be taken down if they expose human rights violations, democide or any other government and corporate abuses. In other words, Google and YouTube are quickly becoming propaganda arms for those in power. These platforms will not allow people to question and speak out against atrocities like organ harvesting and trafficking, how governments have historically used gun control to make the population compliant and defenseless, or how children have been used and killed in medical experiments.

This kind of suppression will also control what people are allowed to write and communicate about on the Internet. People who fundamentally believe that marriage is defined by the union of one man and one woman may be flagged for committing hate speech, since they are not being “tolerant” of various sexual lifestyles.

Many avid truth tellers are becoming increasingly concerned that this kind of censorship might become international law under the secretive Trans-Pacific Partnership (TPP).

OpenMedia’s digital rights specialist Meghan Sali reports, “Internet users around the world should be very concerned about this ultra-secret pact. What we’re talking about here is global Internet censorship. It will criminalize our online activities, censor the Web, and cost everyday users money. This deal would never pass with the whole world watching — that’s why they’ve negotiated it in total secrecy.”

Leaked TPP documents reveal that “Internet Service Providers could be required to ‘police’ user activity, take down Internet content, and cut people off from Internet access for common user-generated content.”

Despite all efforts to suppress freedom of information, the independent media is rising

As Google and YouTube turn into oppressive propaganda arms to benefit those in power, truth tellers are not backing down.

As the TPP deal threatens to destroy freedom of speech and freedom of the press around the world, solutions are rising up.

For instance, GoodGopher.com has become the search engine of choice for the independent media, prioritizing freedom of thought, freedom of expression and freedom of the press.

AlternativeNews.com, on the other hand, makes it easier for people to access the independent media, highlighting the stories that the mainstream media twists, ignores and censors.