– US ‘To Boost’ Military Aid To Israel By ANOTHER $1.5 Billion Per Year (Israel Is Receiving Already $3 Billion A Year)

– The US Spends $35 Billion In Global Economic Aid (But Where Does All This Money Really Go?):

The United States provided approximately $35 billion in economic aid to over 140 countries in fiscal year 2014. 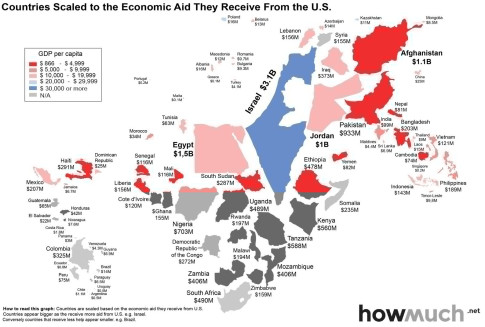 Clearly, not all aid is distributed equally. The question is: Who received the largest slice of the pie from the U.S.? From the map above, the answer is clear: Israel.

Of the $35 billion of total economic aid distributed, almost a quarter of funds went to five countries.  Below are the top 5 recipients of economic aid in 2014.

At first glance, one may wonder why Israel would receive roughly 9% of U.S. economic aid. It is important to note that foreign aid has a variety of uses depending on the current political, economic, and social climate.

According to the U.S. State Government 2013-2015 Foreign Assistance report, all $3.1 billion of Israel’s funding was used for military financing.  In Egypt, $1.3 billion of $1.5 billion received was used for military-related activities as well.  On the other hand, the majority of funds received by Afghanistan, Jordan, and Pakistan were used for economic development purposes.

Below is a breakout of aid received by geographic region in fiscal year 2014.

With 142 countries receiving aid out of the 188 countries listed with the International Monetary Fund (IMF) in 2014, approximately 76% of the world received some form of economic assistance from the U.S., the majority located within Africa and the Near East.

Depending on future geopolitical events, this allocation is subject to change; however, according to the federal government’s 2015 estimates, the approximate $33 billion requests in aid follow a similar geographic allocation.  Nonetheless, in the past three years, the economic support from the U.S. will have impacted a large majority of the world’s population, totaling $103 billion in economic support across various programs.

2 thoughts on “The US Spends $35 Billion In Global Economic Aid (But Where Does All This Money Really Go?)”