Well, the USS Lassen sailed within 12-nautical miles of Subi Reef and surprisingly, World War III did not break out overnight. 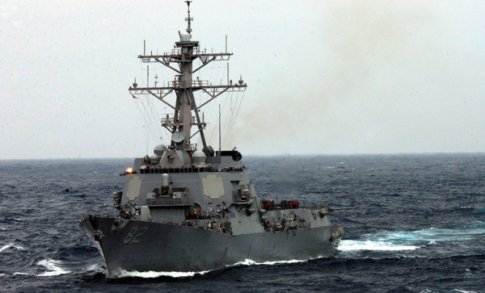 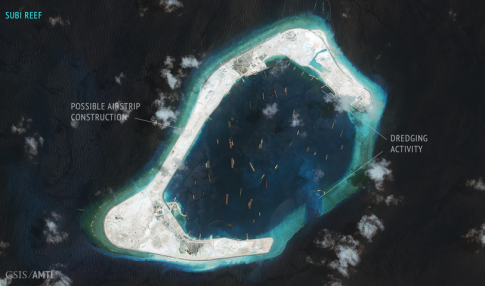 Nine months of tension between Washington and Beijing over the latter’s land reclamation efforts in The South China Sea culminated on Monday with President Obama’s decision to send a guided missile destroyer to China’s man-made military outposts on a “freedom of navigation” exercise. As we put it on Monday evening:

“The ball is now squarely in China’s court. The question now is whether Beijing will back down and concede that “sovereignty” somehow means something different with regard to the islands than it does with respect to the mainland or whether Xi will stick to his guns (no pun intended) and take a pot shot at a US destroyer.”

In short, some feared that based on recent rhetoric out of Beijing (e.g. the PLA will “stand up and use force”) that China might actually fire upon the US-flagged vessel or at least move to surround it in what might mark the first step on the road to war.

Ultimately, that didn’t happen as China apparently decided to take the high road for now and avoid an escalation that might have had far-reaching consequences.

China said it will take “all necessary measures” to defend its territory after the U.S. sailed a warship through waters claimed by China in the disputed South China Sea, a move the government in Beijing called a threat to peace and stability in Asia.

“The behavior of the U.S. warship threatened China’s sovereignty and national interest, endangered the safety of the island’s staff and facilities, and harmed the regional peace and stability,” Foreign Ministry spokesman Lu Kang said in a statement today. “The Chinese side expressed its strong discontent and firm opposition.”

The comments came hours after the USS Lassen passed within 12-nautical miles of Subi Reef, an island built by China as a platform to assert its claim to almost 80 percent of one of the world’s busiest waterways. By passing so close to the man-made island, the U.S. is showing it doesn’t recognize that the feature qualifies for a 12-nautical mile territorial zone under international law.

The patrol marks the most direct attempt by the U.S. to challenge China’s territorial claims and comes weeks after President Barack Obama told President Xi Jinping at a Washington summit that the U.S. would enforce freedom of navigation and that China should refrain from militarizing the waterway.

In a strongly-worded statement, Lu said the USS Lassen had “illegally” entered Chinese waters and that “relevant Chinese departments monitored, shadowed and warned the U.S. ship.” China has “indisputable” sovereignty over the Spratly Islands and surrounding waters, Lu said.

“What the U.S. is doing now will only damage the stability in the South China Sea, and send the wrong message to neighboring nations such as the Philippines and encourage them to take some risky behavior,” said Xu Liping, a professor of Southeast Asian studies at the Chinese Academy of Social Sciences, a government-linked institute.

While it’s not entirely clear what professor Xu Liping means by “encourage the Philippines to take some risky behavior,” it’s worth noting that Washington’s provocation is in some respects explicity designed to embolden America’s regional allies. That is, this isn’t going on in Washington’s backyard. This is simply the US responding to calls from its friends in the South Pacific to counter what they view as Chinese aggression by letting Beijing know that Big Brother isn’t going to stand for any bullying from the PLA. That gambit appears to have paid off – for the time being.

As for what comes next, Malcolm Davis, an assistant professor in China-Western relations at Bond University on Australia’s Gold Coast tells Bloomberg China could move to set up a no-fly zone:

China may choose to respond without directly challenging U.S. ships with its Navy or coast guard. It could declare an Air Defense Identification Zone over the South China Sea, or speed up the militarization of the area by deploying extra forces, including combat aircraft, to the islands.

“The ball would then be back in the U.S.’s court,” Davis said. “A Chinese attempt to enforce an ADIZ over the South China Sea would increase tensions with its neighbors, most notably Vietnam, the Philippines and Malaysia, and they would place increasing pressure on Washington not to back down.”

In other words, China doesn’t need to fire on a US destroyer to ratchet up the pressure. Beijing can simply continue to do what it’s done up until now; that is, militarize the region and essentially dare the US to take action beyond sailing by and waving.

We suspect we’ll see plenty of new satellite images over the coming weeks and months which purport to show the extent to which the PLA is beefing up its defenses in the face of unnecessary (not to mention extremely petty) posturing on Washington’s part.