There’s a privacy destroying bill moving through Congress called the Cybersecurity Information Sharing Act, or CISA, and it’s imperative that the American public stop it in its tracks. Here are a few bullet points on the bill from Fight for the Future:

While the Constitution protects Americans from the federal government, private companies don’t care about your 4th Amendment rights, particularly if you waive them in a “terms of service” agreement. CISA would essentially allow the U.S. government to violate the U.S. Constitution by coercing companies to provide them with data on American citizens it would not otherwise be allowed to collect on its own.

Naturally, Washington D.C. is salivating over the prospect of such a bill. As the Hill notes:

But many industry groups, a large bipartisan coalition of lawmakers and the White House believe CISA is a needed first step to help better understand and repel the overseas cyberattacks plaguing both government and the private sector.

Of course, it’s the people who know absolutely nothing about technology, but who are experts in the art of abusing government power and accepting bribes, who are most in favor of CISA.

Meanwhile, many large tech companies have publicly come out against the bill.

In recent weeks, a number of prominent tech companies, such as Apple, reddit, Twitter, Yelp and Wikimedia have all come out against the bill. The Computer & Communications Industry Association (CCIA), an influential trade group representing Facebook, also expressed concernsabout CISA.

But look which one is missing from the list. The company with the most extensive database of all, and one with a history of egregious privacy abuses: Facebook.

Fight for the Future notes:

Mark Zuckerberg once called Facebook users “dumb f*cks” for trusting him with their data. Now he’s trying to take advantage of us. If CISA passes, all your photos, posts, relationships, and likes will have a path to government databases. 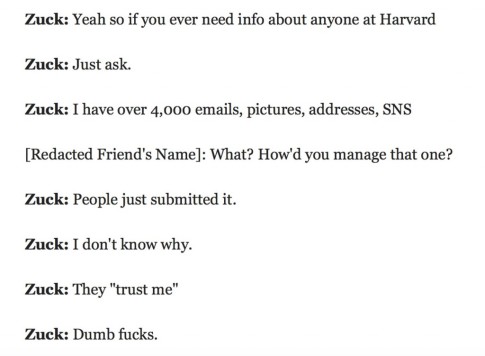 It didn’t make any sense. This bill is toxic. The public hates it and tons of tech companies are against it, but Congress keeps trying to ram it through. Now that we know that Facebook lobbyists are working behind the scenes to get it passed, it makes more sense why Congress keeps coming back to it.

Facebook’s chief Senate lobbyist, Myriah Jordan, worked as General Counsel for CISA’s sponsor, Senator Richard Burr, right up until taking the job at Facebook. On her lobbying disclosures she lists “cybersecurity” as one of the issues she’s been discussing with senators. These “revolving door” connections give companies more power and influence than ordinary people could ever have, and it’s part of the reason why companies like Facebook think they can get whatever they want out of Washington.

Several offices on the Hill have heard from Facebook that they support CISA. As much as we wish we could reveal our sources, we agreed not to (selective leaking is part of how the lobbying game works, unfortunately). But this information matches with everything we know about Facebook’s love for CISA over the years. They backed the bill loudly before it was unpopular and then stayed silent as other big tech companies came out against it. We’ve asked them to state their position publicly, but they have said nothing. Facebook has backed this from day one, and now they’re the lone tech voice still working to make sure it passes.

Now here’s what Edward Snowden had to say about the entire affair:

Why You Should Think Twice Before Using Facebook’s Messenger App

Was the Department of Defense Behind Facebook’s Controversial Manipulation Study?