“The deterrent of nuclear weapons has started to lose its value, and some have even got the illusion that a real victory of one of the sides can be achieved in a global conflict, without irreversible consequences for the winner itself – if there is a winner at all.” 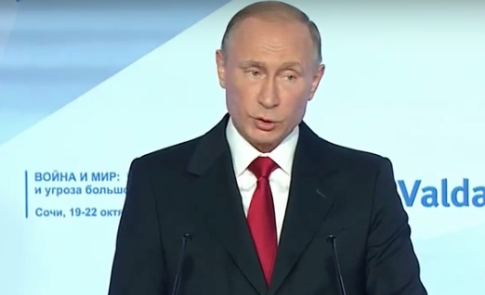 Vladimir Putin is basking in Russia’s triumphant return to the world stage.

What began with a land grab in Crimea and escalated with support for the separatists at Donetsk, culminated in Moscow’s dramatic entry into Syria’s protracted civil war.

To be sure, the deplorable (not to mention comically absurd) strategy adopted by the US and its regional allies in Syria set Putin up for success. The situation was highly exploitable by anyone that’s strategically minded and thanks to the convoluted set of alliances Washington has built with groups that later turned out to be extremists, Moscow gets to achieve its regional ambitions while simultaneously fighting terrorism. Meanwhile, Washington, Riyadh, Ankara, and Doha are left to look on helplessly as their Sunni extremist proxy armies are devastated by the Russian air force. The Kremlin knows there’s little chance that the West and its allies will step in to directly support the rebels – the optics around that would quickly turn into a PR nightmare.

All of this has provided the perfect backdrop for Putin to begin what’s amounted to a lecture tour on how to conduct foreign policy.

Soundbites have ranged from very serious commentary on why the West should not employ extremists to bring about regime change to comical jabs at the US and its allies who the Russian President last week accused of having “oatmeal brains” when it comes to Mid-East policy.

Speaking today at the International Valdai Discussion Club’s 12th annual meeting in Sochi, Putin delivered a sweeping critique of military strategy and foreign policy touching on everything from the erroneous labeling of some extremists as “moderates” to the futility of nuclear war.

“Why play with words dividing terrorists into moderate and not moderate. What’s the difference?,” Putin asked, adding that “success in fighting terrorists cannot be reached if using some of them as a battering ram to overthrow disliked regimes [because] it’s just an illusion that they can be dealt with [later], removed from power and somehow negotiated with.”

“I’d like to stress once again that [Russia’s operation in Syria] is completely legitimate, and its only aim is to aid in establishing peace,” Putin said of Moscow’s Mid-East strategy. And while he’s probably telling the truth there, it’s only by default. That is, peace in Syria likely means the restoration of Assad (it’s difficult to imagine how else the country can be stabilized in the short-term), and because that aligns with Russia’s interests, The Kremlin is seeking to promote peace – it’s more a tautology than it is a comment on Putin’s desire for goodwill towards men.

And then there’s Iran and its nascent nuclear program. Putin accused the US of illegitimately seeking to play nuclear police officer, a point on which he is unquestionably correct: The “hypothetical nuclear threat from Iran is a myth. The US was just trying to destroy the strategical balance, [and] not to just dominate, but be able to dictate its will to everyone – not only geopolitical opponents, but also allies.”

Speaking of nukes, Putin also warned that some nuclear powers seem to believe that there’s a way to take the “mutually” out of “mutually assured destruction.”

That is, Putin warned against the dangers of thinking it’s possible to “win” a nuclear war. Commenting on US anti-missile shields in Europe and on the idea of MAD, Putin said the following:

“We had the right to expect that work on development of US missile defense system would stop. But nothing like it happened, and it continues. This is a very dangerous scenario, harmful for all, including the United States itself.  The deterrent of nuclear weapons has started to lose its value, and some have even got the illusion that a real victory of one of the sides can be achieved in a global conflict, without irreversible consequences for the winner itself – if there is a winner at all.”

In short, Putin is suggesting that the world may have gone crazy. The implication is that the US believes it not only has the capacity to win a war against the nations Washington habitually places on its various lists of “bad guys” (i.e. Russia, Iran, and China), but that Washington believes America can win without incurring consequences that are commensurate with the damage the US inflicts on its enemies. That, Putin believes, is a dangerous miscalculation and one that could end up endangering US citizens.

So once again, this is Putin setting the narrative and jumping at every opportunity to portray Russia as a nation that’s not content to “lead from behind” (as so many have recently accused the US of doing). And once again, his assessment seems remarkably sober in a world that does indeed seem to have lost its collective mind.