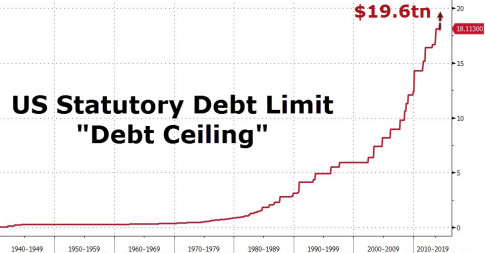 Even as the bond market has been rather concerned about another possible debt ceiling showdown as we showed before, and which earlier today prompted the Treasury to announce the purposefully dramatic step of postponing the auction of 2 Year Notes next week, the reality is that one way or another, with an equity-driven wake up call for the GOP or without, the debt ceiling will be raised.

The only question is how much.

As a reminder, the reason why the total US debt held by the public hasn’t budged from $18.1 trillion since March 16, 2015 is because that is when the last debt ceiling limit was hit. In the seven month since, the US Treasury has been cruising along on emergency cash measures, even as the total debt – if only for reporting purposes – has not budged (in reality it has grown by about half a trillion).

It will budge very soon, because no matter what the outcome of the upcoming week of debt ceiling negotiations, one thing is certain: the US has to be able to borrow more in order to survive.

And as The Hill reported, when one gets beyond the traditional posturing, the outcome will be the following:

The House is expected as early as Friday to vote on a conservative debt-limit proposal even though chances are slim that the plan can pass the Senate.

Speaker John Boehner (R-Ohio) told the GOP conference on Wednesday that he is expecting a vote on the Republican Study Committee (RSC) plan that would raise the debt limit to $19.6 trillion from $18.1 trillion and would run through March 2017.

Who will be the Republican to submit the unpopular measure? Most likely the outgoing speaker John Boehner, who will seal his tenure with this final act:  “With only two weeks to go, the pressure is on the House to pass a measure that raises the nation’s $18 trillion debt ceiling amid a search for the next Speaker.”

Yes, the republicans will pretend to demand concessions, such as a balanced budet and other “sound money” conditions…

The proposal would require a House vote on a balanced-budget amendment by Dec. 31, would implement a short-term freeze on federal regulations through July 1, 2017, and would compel the House to remain in session without a break if spending bills aren’t done by Sept. 1.

… but they won’t get them because the corporations pulling the strings of every D.C. politicians are the biggest beneficiaries from US debt-funded largesse, especially if one throws in the occasional contained or not so contained war.

This means another victory for the Demorats who have required a “clean” debt raise. This is precisely what they will get, and why it will have to take place under John Boehner as Paul Ryan would surely tarnish his reputation with the Freedom Caucus if his first act is one seen as submission to the left.

Which means that the only certain outcome from the melodramatic debt ceiling fight over the next several days, is the following: the US is about to have a brand spanking new debt ceiling, one that should last it until March of 2017: $19,600,000,000,000.

If the chart below looks increasingly exponential, that is not a coincidence.