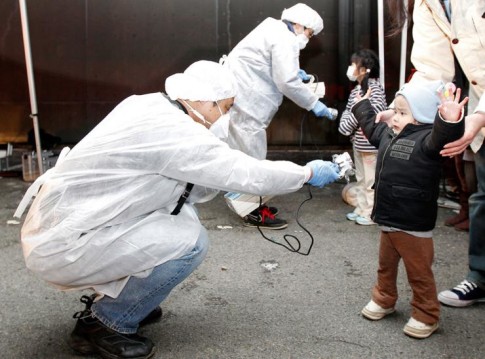 The main reason why Japan has been able to successfully push the 2011 Fukushima nuclear power plant disaster far out of the public eye, is for the simple reason that the tragic fallout from said disaster would take many years to materialize: after all, it takes a long time between the initial irradiation to the first cancer symptoms, to the sad terminal outcome.

However, for the biggest, and most criminal, cover up by a Japanese government in recent history, the irradiated chickens are coming home to roost and earlier today Japan finally acknowledged the first “possible casualty” from radiation at the wrecked Fukushima nuclear power plant, a worker who was diagnosed with cancer after the crisis broke out in 2011.

According to Reuters, “the health ministry’s recognition of radiation as a possible cause may set back efforts to recover from the disaster, as the government and the nuclear industry have been at pains to say that the health effects from radiation have been minimal.“

Reuters also adds that this announcement may also add to compensation payments that had reached more than 7 trillion yen ($59 billion) by July this year. That, however for those morbidly wondering, is bullish for stocks: it means Japan will need to issue more debt, thus giving the BOJ even more debt to monetize, thus pushing the Nikkei higher.

Reuters has more on Japan’s lies:

Hundreds of deaths have been attributed to the chaos of evacuations during the crisis and because of the hardship and mental trauma refugees have experienced since then, but the government had said that radiation was not a cause.

The male worker in his 30s, who was employed by a construction contractor, worked at Tokyo Electric Power Co’s Fukushima Daiichi plant and other nuclear facilities, a health ministry official said.

And yet, even when it partially admits the truth, Japan is still lying: according to the Japanese ministry official, of total radiation exposure of 19.8 millisieverts (mSv), the worker received a dose of 15.7 (mSv) between October 2012 and December 2013 working at Fukushima. As the pursits will repeatedly point out, this exposure is well lower than the annual 50 mSv limit for nuclear industry workers, suggesting that the government was not only lying about the risk of death by radiation, but also about the total exposure innocent civilians had been exposed to while believing the government’s lies.

The good news is that with Japan’s blatant disregard for human life now exposed, Japan’s civilians can finally take the protective measures they should have taken years ago.

The bad news, is that this is only the first tragic death resulting from Fukushima (with countless many more covered up). And now that the government has admitted the truth (which it likely did as it had no other choice as the bodies were piling up rapidly), expect hundreds if not thousands more Fukushima-related casualties to “make the news” in the months ahead.