“Like I said before, Cat’s products form the first stage of any large project.

If they have no orders, nobody has any orders & we grind to a halt.

When that happens, we all stand there looking at each other.

Then all hell breaks loose.”

And again, this is the Greatest Depression.

– If Caterpillar’s Data Is Right, This Is A Global Industrial Depression:

Most cats bounce at least once when they die, but not this one: after CAT posted its first annual drop in retail sales in December of 2012, it has failed to see a rise in retail sales even once.

Why is this important? Because a month ago we asked: “What On Earth Is Going On With Caterpillar Sales?”

We have been covering the ongoing collapse in global manufacturing as tracked by Caterpillar retail sales for so long that there is nothing much to add.

Below we show the latest monthly data from CAT which is once again in negative territory across the board, but more importantly, the global headline retail drop (down another 11% in August) has been contracting for 33 consecutive months! This is not a recession; in fact the nearly 3 year constant contraction – the longest negative stretch in company history – is beyond what most economists would deem a depression.

We got the answer just three days later when the industrial bellwether confirmed the world is now in an industrial recession, when it not only slashed its earnings outlook, but announced it would fire a record 10,000.

Moments ago, CAT reported its latest monthly retail sales and they were even worse than last month: in the month of September there was not a single region that posted either a increase of an unchanged print. This was the first month in all of 2015 in which every region posted a drop. 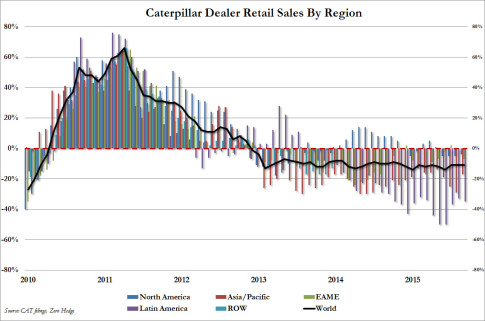 Putting CAT’s result in context, the Great Financial Crisis resulted in 19 consecutive months of sales declines. We are currently at 34 months and showing no signs of any pick up. 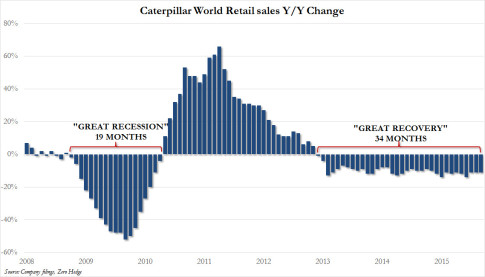 As such, based on CAT’s ongoing shockingly bad retail sales we wonder if it is no longer merely a global recession: perhaps that time has come to call it what it really is – a global industrial (at first) depression, which has so far been hidden from plain view thanks to $13 trillion in central bank liquidity, whose marginal impact is evaporating by the day and a Chinese credit machine which recently hit a brick wall.

1 thought on “If Caterpillar’s Data Is Right, This Is A Global Industrial Depression”