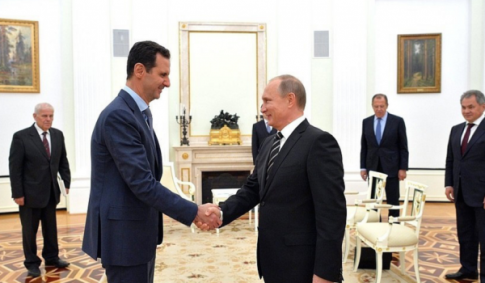 – From Russia With Love: Assad Unexpectedly Visits Putin In Moscow:

On Tuesday, we noted how absurd it is for Saudi foreign minister Adel al-Jubeir to suggest that it will be “difficult” for Iran to play a part in “resolving” Syria’s years-old civil war. Here’s how we put it yesterday:

It’s rather strange for the Saudis to make statements like “it will be difficult for Iran to play a role in finding a solution to the conflict.” We hate to be the bearers of bad news, but Iran is already playing a role in finding a “solution” – they’re summarily wiping out the groups funded by the Saudis on the way to restoring the regime. If anyone is going to have a “difficult” time playing a part, it’s the Saudis.

That same logic applies to the US and any of Washington and Riyadh’s regional allies.

With each passing day, the opportunity for the West and the Sunni axis to have some say in Syria’s political future slips away. As we’ve said on a number of occasions, Russia isn’t going to risk the lives of her troops and spend who knows how many tens if not hundreds of millions of dollars only to have the West dictate the terms of any political “transition” which may or may not take place once the smoke has cleared.

Indeed, several Western powers and some of the regional backers of the Sunni extremist groups battling the regime have already admitted that Assad may have to remain in power during a “transitional” period.

Now that Iranian ground troops are poised to take Aleppo in what amounts to a final push to restore Assad’s grip over the country, The Kremlin is already looking at how to go about shaping the country’s political future as Assad traveled to Moscow in what the media says is his first foreign visit since the start of the civil war. At a meeting with Putin, the two leaders discussed the “political process” and reviewed the progress in the fight against “international terrorists.” Here’s Bloomberg with more:

Syrian President Bashar al-Assad held talks in Moscow with President Vladimir Putin on Tuesday in his first known foreign visit since the civil war erupted in 2011, underscoring the growing Russian role in the four-year conflict.

Almost a month into a Russian bombing campaign in support of Assad’s forces, Putin told the Syrian leader during the unannounced visit to the Kremlin that “there have been some major positive results in this fight” against the “international terrorists” battling government forces, according to a transcript released by Russia’s government.

Ending the crisis requires “a political process with the participation of all political forces, ethnic and religious groups,” Putin said in comments shown on Russian state television on Wednesday. Assad, thanking Russia for its assistance, said the fight against “terrorism” is the “obstacle against any true political steps that could be taken on the ground.”

Sami Nader, head of the Beirut-based Levant Institute for Strategic Affairs, said the trip to Moscow was Assad’s first foreign visit since the Syrian conflict began with an uprising against the regime in Damascus, and pointed to future Russian strategy ahead of any peace talks.

It’s “Russia’s way of saying he is in our pocket, he is our asset and we will decide whether to keep him,” Nader said. “This is for sure a preparation for a deal and one more attempt by the Russians to embolden their bargaining position.”

And so, just as we said from the beginning, Moscow’s move to muscle the West out of the way militarily has led directly to Russia hijacking the political negotiations as well.

In short: Washington and its regional allies will be allowed to participate in a discussion with The Kremlin, but that’s as far as it goes. Russia will decide Syria’s political future in consultation with Iran and given the strategic importance for Tehran of ensuring that there’s a “friendly” government operating in Damascus, you can bet that whatever the solution ends up being, Washington, Riyadh, Ankara, and Doha will most assuredly not like it.

To the victor go the spoils.

For now, we’ll close with one quote from Sergei Karaganov, dean of the Faculty of World Economy and International Affairs at Moscow’s Higher School of Economics, and one amusing picture which we’ll leave it to readers to caption (note the ear-to-ear grins).

“The message to the world is that Russia solves problems and you don’t. If you want to solve problems, work with us.”

2 thoughts on “From Russia With Love: Assad Unexpectedly Visits Putin In Moscow”