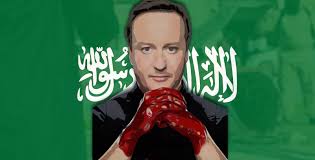 While increasing cries from the West demand an end to all association with Saudi Arabia, the U.K. government described lucrative public contracts with the notorious human rights abuser as a “priority market.”

Government departments have been actively — even aggressively — steering U.K. businesses into bidding for contracts with the Saudis in the health, justice, defense, and security sectors, according to documents seen by the Observer.

“It’s becoming increasingly clear that ministers are bent on ever-closer ties with the world’s most notorious human rights abusers,” said Maya Foa, who directs the death penalty team at Reprieve. “Ministers must urgently come clean about the true extent of our agreements with Saudi Arabia and other repressive regimes.”

As three young Saudis, Ali Mohammad al-Nimr, Abdullah al-Zaher, and Dawoud al-Marhoon face beheading and crucifixion — and another blogger, Raif Badawi, essentially receives a drawn-out death sentence of 1,000 lashes — the U.S. and U.K. governments have been barraged with criticism for continuing political relations. Perhaps inflaming the issue more, according to the Guardian, several of the “most important Saudi contracts” fell under the Overseas Security and Justice Assistance Policy (OSJA) — meant to establish U.K.’s security and justice dealings as “consistent with a foreign policy based on British values, including human rights.”

Labour Party leader Jeremy Corbyn penned an openly critical letter to Prime Minister David Cameron in which he pled for an independent review of the OSJA process:

“By operating under a veil of secrecy, we risk making the OSJA process appear to be little more than a rubber-stamping exercise, enabling the U.K. to be complicit in gross human rights abuses,”  he wrote.

But the U.K. has increased dealings with the kingdom, ignoring the pleas.

In fact, the U.K. is now Saudi Arabia’s largest arms dealer — supplying 36% of its imports. According to the Guardian,

“U.K. business[es] want to capitalize on the fragile situation in the Middle East. A 2013 document, written by an official at U.K. Trade and Investment, the body charged with promoting business interests, outlines how the region’s ‘global policing and security market has ballooned.’ Freedom of Information requests show that the U.K. Trade and Investment Defense and Security Organization (UKTI) is courting the Saudis and that civil servants met Saudi military delegations at the U.K.’s Security and Policing arms fair this year and last summer at the Farnborough airshow. Civil servants were also due to meet Saudi representatives at the major arms expo in London’s Docklands last month, just as the regime upheld a ruling that al-Nimr was to be executed and his body crucified and left in public view for three days.”

Many are struggling to understand why the U.K. would seek to supply arms to the same country from which it withdrew a £5.7 million (nearly $8.8 million) prison contract less than a week ago — reportedly due to yet another impending lashing: this time of 74-year-old Karl Andree for transporting homemade wine in his vehicle.

“The Saudi regime has an appalling human rights record,”said Andrew Smith of the Campaign Against Arms Trade, “yet it remains the world’s largest buyer of U.K. weapons. How many more people will be tortured and killed before the U.K. government finally says enough is enough?”

Saudi Arabia executed at least 134 people so far in 2015, according to a report from Amnesty International. As Smith noted:

“It seems ironic for the U.K. to be working on healthcare with the Saudi regime at the same time as selling them the means to suppress and kill their own people.”