Kaku is an elite asset. He is not ‘for real’.

The question is … why are TPTB releasing this “information” now? 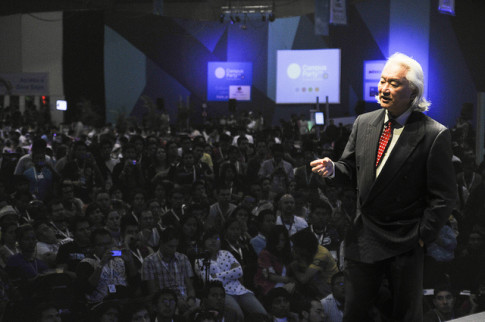 Have you ever wondered if intelligent life exists somewhere else other than on the planet Earth?

Well wonder no more because top futurist, theoretical physicist, Michio Kaku just let the cat out of the bag and what he had to say may shock you!

“This could be the biggest story in the past five-hundred years,” Michio Kaku explained.

You see the Kepler Telescope team has been monitoring a particular star named “KIC 8462852″, first discovered in 2009, for quite some time now and what the operators have found is simply amazing.

Kaku said that “this star is breaking all the rules” and that “we would have to rewrite astronomy text books” to think anything different.

“Basically if a planet eclipses a Mother Star, goes in front of the Mother Star, starlight drops maybe one percent at maximum–however starlight has been dropping at twenty-two percent,” Kaku explained.

“There is a colossal, humongous, object of some sort blocking the starlight from this star.”

“We’ve ruled out all of the usual suspects; rouge planets, comets, asteroids” and the only thing left is an ‘alien superstructure’ of some type.

“We’re talking about what’s called a Type Two Civilization that could build a gigantic [Dyson] sphere possibly bigger than Jupiter to absorb starlight” to produce energy, which Kaku admits “is right out of science fiction.” 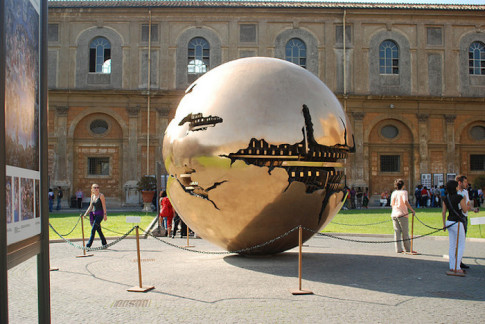 Art symbolic of a Dyson Sphere located in the Vatican Courtyard. (Photo: Julia/Flickr)

We have to assume “it’s made by a civilization a few thousand years more advanced than ours,” Kaku said.

We here on Earth are “what’s called a Type Zero Civilization” because “we get our energy from oil and coal.”

“Type one would be like Buck Rodgers” and imagine we are talking Type II.

“Next we are going to focus our radio-telescope to see if we can eavesdrop” on them, Kaku said.

We want to “see if there is any regular radio emissions from that planet.”

Mayan documents, i.e. artifacts, dating back at least 1300-years reveal that the human race is not alone and that highly advanced technologies including space travel have likely already existed for quite some time.

Not only does documentation released by the Mexican government show the existence of an explorer race it may also reveal the roots of mankind altogether.

Some consider the Government’s presentation of the information to be a major step forward for humanity as the truth is finally making its way out. Hopefully this will prompt other governments around the world to be more forthcoming with such information, turning the tide in the UFO and extraterrestrial research community for good.Sundance winner Juan Carlos Rulfo’s documentary film Revelations of the Mayans 2012 and Beyond also touches on such an advanced race and technology. Rulfo said, the films producer Raul Julia-Levy mentioned how the documentary-makers were working in cooperation with the Mexican government for what he said was “the good of mankind”. He said the order to collaborate came directly from the Country’s top officials and President Álvaro Colom Caballeros himself.

“Mexico will release codices, artifacts and significant documents with evidence of Mayan and extraterrestrial contact, and all of their information will be corroborated by archaeologists.”

“The Mexican government is not making this statement on their own – everything we say, we’re going to back it up.”

But Caballeros himself was conspicuous by his absence from the statement released by Julia-Levy. So far, the minister of tourism for the Mexican state of Campeche, Luis Augusto García Rosado, appears to be the highest-ranking government official to go on record confirming the discovery of extraterrestrial life, but he’s not holding back.

In a statement, Rosado spoke of contact “between the Mayans and extraterrestrials, supported by translations of certain codices, which the government has kept secure in underground vaults for some time.” In a telephone conversation with the Wrap, Rosado also spoke of “landing pads in the jungle that are 3,000 years old”.

These secrets have been said to be “protected” by the Mexican government for as long as 80-years.