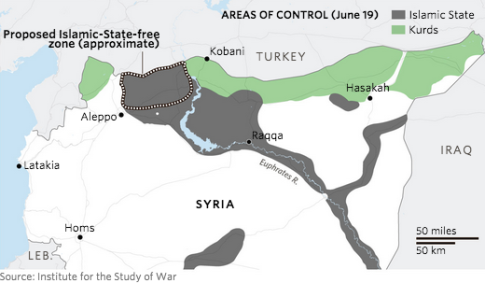 “The big battle preparations in that area are clear,” said one of the officials familiar with the plans. “There is a large mobilization of the Syrian army … elite Hezbollah fighters, and thousands of Iranians who arrived in stages in recent days.”

– Iran Sends “Thousands” Of Troops To Syria For Russian-Backed Assault On Key City:

As those who follow Mid-East affairs are acutely aware, the regime in Syria has enjoyed both military and financial support from Iran for the duration of the country’s civil war.

Syria cannot fall to the West if Tehran intends to preserve the regional balance of power and an Iran-friendly Damascus ensures the supply lines remain open between the IRGC and Hezbollah. Lose Syria, and suddenly, the Mid-East tide turns in favor of the Saudis and Qatar and that, clearly, is an unacceptable outcome.

That said, Iran’s role on the ground in Syria has taken some off guard of late. Perhaps it’s the fact that Tehran’s participation on the ground has become more overt even as one would imagine that Iran would be keen to not antagonize the West on the heels of the nuclear deal which has the potential to facilitate the lifting of crippling economic sanctions. The key seems to be Russia’s involvement, which effectively gives Iran’s Syrian ground operations the superpower stamp of approval.

The strategy, as we’ve noted on several occasions of late, is that Russia clears the way with aggressive aerial bombardments and then Iran, operating through either Hezbollah, Iraqi Shiite militias, and/or the IRGC sweeps in on the ground and takes care of whatever anti-regime forces may be left in the wake of the Russian airstrikes.

This has worked well thus far and now apparently, Iran has sent “thousands” of troops to Syria in preparation for an assault on Aleppo. Here’s Reuters:

A delegation of Iranian lawmakers arrived in Damascus on Wednesday in the build-up to a joint operation against insurgents in northwest Syria, and said U.S.-led efforts to fight rebels had failed.

The visit, led by the chairman of the Iranian parliament’s National Security and Foreign Policy Commission, Alaeddin Boroujerdi, came as Iranian troops prepared to bolster a Syrian army offensive that two senior officials told Reuters would target rebels in Aleppo.

The attack, which the officials said would be backed by Russian air strikes, underlined the growing involvement in the civil war of Syrian President Bashar al-Assad’s two main allies, which has alarmed a U.S.-led coalition opposed to the president that is bombing Islamic State militants.

“The international coalition led by America has failed in the fight against terrorism. The cooperation between Syria, Iraq, Iran and Russia has been positive and successful,” Boroujerdi was quoted as saying by Iran’s state broadcaster IRIB as he arrived at Damascus airport.

The delegation was due to meet Assad, said officials.

Iran has sent thousands of troops into Syria in recent days to bolster the planned ground offensive in Aleppo, the two officials told Reuters.

And a bit more color:

Syria’s army along with Iranian and Hezbollah allies will soon launch a ground attack supported by Russian air strikes against insurgents in the Aleppo area, two senior regional officials told Reuters on Tuesday.

Control of Aleppo city and the surrounding province in the area near the Turkish border is divided among the Syrian government, insurgent groups fighting Assad and the Islamic State group that controls some rural areas near the city.

“The big battle preparations in that area are clear,” said one of the officials familiar with the plans. “There is a large mobilization of the Syrian army … elite Hezbollah fighters, and thousands of Iranians who arrived in stages in recent days.”

As a reminder, Aleppo is very close to the so-called “ISIS free zone” that the US and Turkey planned to establish months ago. Here’s the map:

This means that Russian and Iranian forces will be closing in on a particularly sensitive area of the country as it relates to the Syrian-Turkish border, setting the stage for more tension between Ankara and Moscow and suggesting that the Iran-Russia “nexus” is on the verge of marking yet another key milestone in the effort to restore the regime.

Bear in mind that this has all unfolded in the space of just a few weeks, and we wonder just how long it will be before the assault on Raqqa will begin, because if the ISIS capital were to fall, the end would truly be nigh for anti-regime elements operating in Syria.