This past weekend we called Obama’s latest failed attempt to replace Syria’s president (after a comparable attempt in 2013 also ended in failure) for what it is: “Make no mistake, this is shaping up to be the most spectacular US foreign policy debacle since Vietnam – and we don’t think that’s an exaggeration.”

Some of our high level observations:

The US, in conjunction with Saudi Arabia and Qatar, attempted to train and support Sunni extremists to overthrow the Assad regime. Some of those Sunni extremists ended up going crazy and declaring a Medeival caliphate putting the Pentagon and Langley in the hilarious position of being forced to classify al-Qaeda as “moderate.” The situation spun out of control leading to hundreds of thousands of civilian deaths and when Washington finally decided to try and find real “moderates” to help contain the Frankenstein monster the CIA had created in ISIS (there were of course numerous other CIA efforts to arm and train anti-Assad fighters, see below for the fate of the most “successful” of those groups), the effort ended up being a complete embarrassment that culminated with the admission that only “four or five” remained and just days after that admission, those “four or five” were car jacked by al-Qaeda in what was perhaps the most under-reported piece of foreign policy comedy in history.

Meanwhile, Iran sensed an epic opportunity to capitalize on Washington’s incompetence. Tehran then sent its most powerful general to Russia where a pitch was made to upend the Mid-East balance of power. The Kremlin loved the idea because after all, Moscow is stinging from Western economic sanctions and Vladimir Putin is keen on showing the West that, in the wake of the controversy surrounding the annexation of Crimea and the conflict in eastern Ukraine, Russia isn’t set to back down. Thanks to the fact that the US chose extremists as its weapon of choice in Syria, Russia gets to frame its involvement as a “war on terror” and thanks to Russia’s involvement, Iran gets to safely broadcast its military support for Assad just weeks after the nuclear deal was struck. Now, Russian airstrikes have debilitated the only group of CIA-backed fighters that had actually proven to be somewhat effective and Iran and Hezbollah are preparing a massive ground invasion under cover of Russian air support. Worse still, the entire on-the-ground effort is being coordinated by the Iranian general who is public enemy number one in Western intelligence circles and he’s effectively operating at the behest of Putin, the man that Western media paints as the most dangerous person on the planet.

Today, less than a week later, we have confirmation that this assessment was accurate, following two major developments in the Syria global proxy war.

First, Bloomberg reports that a week into Russia’s military intervention in Syria, some top White House advisers and National Security Council staffers are trying to persuade President Barack Obama to scale back U.S. engagement there, to focus on lessening the violence and, for now, to give up on toppling the Syrian regime.

It adds that “the administration came to this conclusion late. Despite warnings from U.S. intelligence agencies that Putin’s military buildup was intended to keep Assad in power, the White House nonetheless decided to explore cooperating with Russia on the ground. Throughout the summer and into the fall, top Russian officials — including Putin himself in a meeting last month with Obama at the U.N. — said they were not committed to keeping Assad in power for the long term, and would only target Islamic State fighters in their military offensive, according to U.S. officials.”

So U.S. intelligence is shocked that following a multi-year campaign which was launched in 2011, which escalated in 2013 to a near-naval war, and which culminated in 2014 with the “mysterious” emergence of ISIS whose stated purpose according to leaked CIA documents was a simple one: to depose Assad, that Obama’s biggest antagonist on the global superpower stage, Russian president Putin would do everything in his power to prop up his own key pawn in the middle east.

Putin’s intervention has had the U.S. flummoxed from day one. As the Russian military moved into Syria, U.S. intelligence officials tell us, the intelligence community was skeptical that it intended to focus its military campaign on the Islamic State. Even so, as the New York Times reported, the U.S. was surprised by the speed with which Russia built and then announced its new coalition with the governments of Syria, Iran and Iraq to support its military campaign.

Did we say “U.S. intelligence”? Scratch that.

In any event, after confirming virtually every word of our conclusion from past weekend, now that the administration realizes it is trapped without a credible way out absent de-escalation, it has no choice but to do just that:

Obama has ruled out engaging in a proxy war with Putin’s military, leaving few good options. One path, however, would mean finding ways to tamp down the fighting by negotiating small, local ceasefires with the Assad regime. “The White House somehow thinks we can de-escalate the conflict while keeping Assad in power,” one senior administration official told us.

“The current policy of the United States and its partners, to increase pressure on Assad so that he ‘comes to the table’ and negotiates his own departure, must be rethought,” Malley’s predecessor at the National Security Council, Philip Gordon, wrote at Politico as Russia was amassing its forces in Syria.

The planted Bloomberg story, meant solely to lessen the blow from the latest foreign policy humiliation adds that “that view, being pushed by top White House National Security staffers, including senior coordinator for the Middle East Rob Malley, is not new. But it has received fresh emphasis given Russian intervention.”

To be sure, there are neo-con war hawks, led by John Kerry and Samantha Power, who as a reminder was the puppet-masted behind the Ukraine coup, who want to escalate to the bitter end, even if it literally ends in a mushroom cloud: “The NSC view is opposed by top officials in other parts of the government, especially Secretary of State John Kerry and U.S. Ambassador to the UN Samantha Power. They are trying to persuade Obama that the only way to solve Syria is to increase the pressure on Assad in the hopes he will enter negotiations.”

However, just like in the 2013 Syria campaign, when Kerry huffed and puffed and ultimately folded, so two years later the man who married into the Heinz family fortune will have no choice but to fold again:

Yet Kerry and Power now find themselves without any hope that Putin might bring the Syrian regime to the table. Kerry, though always skeptical of Russia, has been the point man on engaging the Russian government through several conversations with Foreign Minister Sergei Lavrov. But it’s now clear the Russians were leading the Obama administration down the primrose path.

Others in Congress have already understood the endgame: Senate Foreign Relations Committee Chairman Bob Corker said that by not doing more to confront Putin’s escalation, “the administration is tacitly admitting it will no longer be able to secure Assad’s ouster.”

The implications are profound:

“If Assad is staying and there’s no political process in sight, this argument goes, the U.S. might as well focus on alleviating the suffering of the Syrian people and mitigate the growing refugee crisis.

Local ceasefires have been struck sporadically throughout the war, mostly in areas under siege by the Assad regime. The United Nations special envoy for Syria, Staffan de Mistura, has been pushing this idea for over a year.

This means that the dramatic migrant exodus heading into Europe, which is now spun as positive for the economy, and would have been the catalyst form more deficit-funding QE as a result of debt-funded spending spree required by Germany to pay for the millions in refugees, may be coming to an end, with substantial implications for monetary policy.

Bloomberg’s own conclusion shows a glimmer of hope that the end is not in sight just yet:

Caught between two camps in his administration, Obama may not end up shifting the U.S. approach to Syria at all, although the de-escalation side has the momentum. Either way, as Russia, Iran and the Syrian regime change facts on the ground, the relative position of America and the Syrians it has supported becomes graver by the day.

And then moments ago, the NYT confirmed that the de-escalation process has begun, when it reported that “the Obama administration has ended the Pentagon’s $500 million program to train and equip Syrian rebels, administration officials said on Friday, in an acknowledgment that the beleaguered program had failed to produce any kind of ground combat forces capable of taking on the Islamic State in Syria.”

Pentagon officials were expected to officially announce the end of the program on Friday, as Defense Secretary Ashton B. Carter leaves London after meetings with his British counterpart, Michael Fallon, about the continuing wars in Syria and Iraq.

A senior Defense Department official, who was not authorized to speak publicly and who spoke on the condition of anonymity, said that there would no longer be any more recruiting of so-called moderate Syrian rebels to go through training programs in Jordan, Qatar, Saudi Arabia or the United Arab Emirates. Instead, a much smaller training center would be set up in Turkey, where a small group of “enablers” — mostly leaders of opposition groups — would be taught operational maneuvers like how to call in airstrikes.

To be sure, the admin tried to soften the blow: moments ago Reuters added that “The U.S. military program to train and equip Syrian rebels is not “ending” but is instead being refocused, a senior U.S. defense official said on Friday, ahead of an announcement on overhauling the troubled U.S. effort.” No matter how one diplomatically phrases it though, at this point the wheels are in motion.

Which brings us to our own conclusion from last week:

If Russia ends up bolstering Iran’s position in Syria (by expanding Hezbollah’s influence and capabilities) and if the Russian air force effectively takes control of Iraq thus allowing Iran to exert a greater influence over the government in Baghdad, the fragile balance of power that has existed in the region will be turned on its head and in the event this plays out, one should not expect Washington, Riyadh, Jerusalem, and London to simply go gentle into that good night.

It is precisely this scenario that U.S. “intelligence” just realized, and why Obama is now sounding the retreat. The only question is whether Putin, who is now on the offensive across the mid-east region, agrees to take Obama’s olive branch, or whether he continues the “campaign to end ISIS“, in the process creating the biggest shift in the mid-east balance of power with a Russia-Syria-Iran-Iraq axis, and with China waiting patiently in the wings. 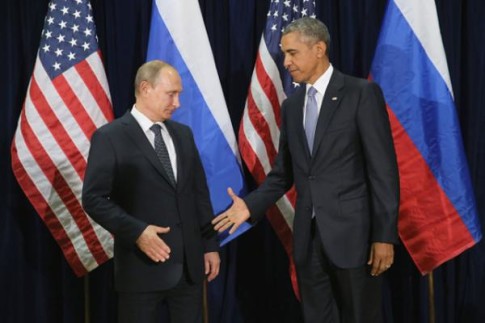 Finally, this may be just the catalyst that ends the torrid surge in oil higher over the past week now that the biggest geopolitical factor pushing black gold above $50 is in the rear view mirror.