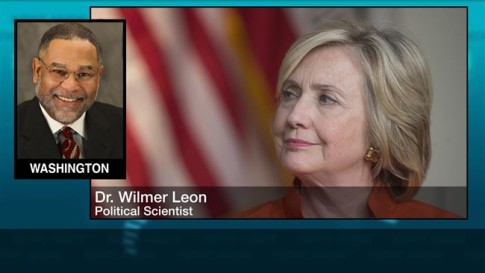 US presidential candidate Hillary Clinton’s email scandal is mostly motivated by partisanship and is more of a “political witch hunt,” an American political scientist says.

US presidential candidate Hillary Clinton’s email scandal is largely motivated by partisanship and is a “political witch hunt” by her detractors, an American political scientist says.

“I believe that probably 80 percent of this Hillary Clinton personal or private email server discussion is politically motivated and a waste of time,” Wilmer Leon said on Thursday.

“The fact that the server has been hacked is not inconsistent with the fact that the United States Office of Personal Management; their server was hacked, subjecting almost 21.5 million Americans to identity theft,” Leon told Press TV.

“The servers at the Department of Defense at the Pentagon have been hacked,” he noted. “It is not nearly as duplicitous as her detractors are trying to make it out to be. This, again I believe, is more of a political witch hunt.”

Clinton, a former secretary of state, senator and first lady, is currently the leading presidential candidate from the Democratic Party.

Clinton’s support among US voters, however, has seen a sharp drop following her email scandal. She used a private email server in her home to conduct official State Department business during her time as US secretary of state.

Her private server was unprotected for more than three months between June to October 2013 before Clinton employees installed a “threat monitoring” product on the network to enhance its security.

Leon said Clinton is not the first secretary of state to use a private server.

The analyst argued that there are far more serious issues in the US political system that need to be brought to the center of attention.

For instance, he said, the focus should be on people like former US President George W. Bush and senior officials in his administration for the lies they told the American people to justify the invasion and occupation of Iraq.