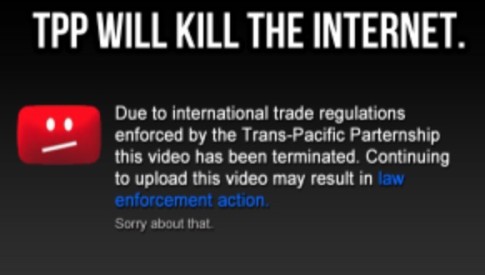 – How the TPP Could Lead to Worldwide Internet Censorship:

On Monday, we learned that global “leaders” had come to an agreement on the infamous Trans Pacific Partnership, or TPP. While discouraging, this doesn’t mean the game is over – far from it.

Although politicians have come to a secret agreement, this democracy killing, corporate monstrosity still has to pass the U.S. Congress. So it’s now up to all of us to create an insurmountable degree of opposition and make sure this thing is dead on arrival.

The more I learn about the TPP, the more horrified I become. In case you need to get up to speed, check out the following:

If that wasn’t enough to concern you, here’s the latest revelation.

The “disastrous” pro-corporate trade deal finalized Monday could kill the Internet as we know it, campaigners are warning, as they vow to keep up the fight against the Trans Pacific Partnership (TPP) agreement between the U.S. and 11 Pacific Rim nations.

“Internet users around the world should be very concerned about this ultra-secret pact,” said OpenMedia’s digital rights specialist Meghan Sali. “What we’re talking about here is global Internet censorship. It will criminalize our online activities, censor the Web, and cost everyday users money. This deal would never pass with the whole world watching – that’s why they’ve negotiated it in total secrecy.”

If that part isn’t obvious by now, I don’t know what is.

TPP opponents have claimed that under the agreement, “Internet Service Providers could be required to ‘police’ user activity (i.e. police YOU), take down Internet content, and cut people off from Internet access for common user-generated content.”

Electronic Frontier Foundation’s (EFF) Maira Sutton wrote on Monday, “We have no reason to believe that the TPP has improved much at all from the last leaked version released in August, and we won’t know until the U.S. Trade Representative releases the text. So as long as it contains a retroactive 20-year copyright term extension, bans on circumventing DRM, massively disproportionate punishments for copyright infringement, and rules that criminalize investigative journalists and whistleblowers, we have to do everything we can to stop this agreement from getting signed, ratified, and put into force.”

Furthermore, “The fact that close to 800 million Internet users’ rights to free expression, privacy, and access to knowledge online hinged upon the outcome of squabbles over trade rules on cars and milk is precisely why digital policy consideration[s] do not belong in trade agreements,” Sutton added, referring to the auto and dairy tariff provisions that reportedly held up the talks.

“Successive leaks of the TPP have demonstrated that unless you are a big business sector, the [U.S. Trade Representative, or USTR] simply doesn’t care what you have to say,” wrote EFF’s Jeremy Malcolm.