Not everything is “fine” in the land of European banks, in fact quite the opposite.

One day after Deutsche Bank warned of a massive $7 billion loss and the potential elimination of the bank’s dividend which had been a German staple since reunification, a move which many said was a “kitchen sinking” of the bank’s problems (but not Goldman, which said it was “not a kitchen sinking, but a sign of the magnitude of the challenge” adding that “this development confirms our view that the task facing new management is very demanding. Litigation issues do not end with this mark down – we expect them to persist for a multi-year period. We do not see this as a “clean up” but rather an indication of what the “fixing” of Deutsche Bank will entail over the 2015-18 period), it was the turn of Switzerland’s second biggest bank after UBS, Credit Suisse, to admit it too needs more cash when moments ago the FT reported that the bank is “preparing to launch a substantial capital raising” when the new CEO Thiam unveils his strategic plan for the bank in two weeks’ time.

FT adds that “while not specifying an amount, they pointed to a poll published last week by analysts at Goldman Sachs concluding that 91 per cent of investors expect the Swiss bank to raise more than SFr5bn in new equity.”

The stock price did not like it, although just like with DB, we expect the “story” to quickly become that the Swiss bank is putting all its dirty laundry to rest, so an equity dilution is actually quite positive. Incidentally, with DB stock green on the day following a dividend cut, perhaps it would go limit up if Deutsche Bank had announced a negative dividend? 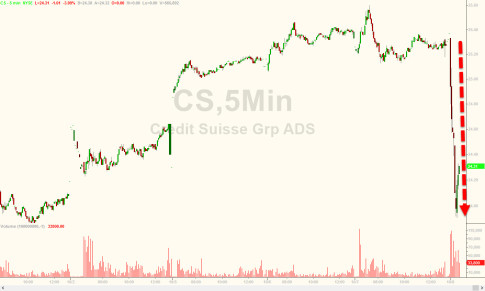 The official narrative is well-known: the bank does not need the funds, it is simply a precaution ahead of new, more stringent capital requirements:

The capital is likely to be used to absorb losses triggered by a faster restructuring of the Swiss group, the people said. But Credit Suisse will also need higher capital ratios to comply with toughening demands from regulators.

The Swiss authorities are expected to announce an increase of minimum capital ratios over the coming months, which could prove more challenging for the bank than its better capitalised local rival, UBS. Credit Suisse’s common equity tier one capital ratio of 10.3 per cent compares with UBS’s 13.5 per cent

The real reason, of course, has nothing to do with this, and everything to do with the collapse of manipulation cartels involving Liebor, FX, commodities, bonds, equities, gold, and so on, because when banks can no longer collude with each other to push markets in any given direction, that’s when they start losing money. That and, of course, the fact that central bank intervention in capital markets has made it virtually impossible to trade any more. Or as they call it, “miss capital ratios.”

Expect many more such announcements in the coming weeks.