Hand those clerics a rifle and send them off to fight against Russia and Iran.

It’s now been nearly a week since Russia began its air campaign in Syria and as we’ve documented extensively, both Moscow and the West have put their respective propaganda machines into high gear in an effort to control the narrative and thus dictate how history will remember Syria’s four-year-old, bloody civil war.

Lacking viable options in the face of Russia’s rapid military deployment at Latakia, the US has turned to the only thing left in the spin toolbox: the contention that Moscow’s airstrikes are hitting the “good” guys. Here’s WSJ:

Russia has targeted Syrian rebel groups backed by the Central Intelligence Agency in a string of airstrikes running for days, leading the U.S. to conclude that it is an intentional effort by Moscow, American officials said.

The assessment, which is shared by commanders on the ground, has deepened U.S. anger at Moscow and sparked a debate within the administration over how the U.S. can come to the aid of its proxy forces without getting sucked deeper into a proxy war that PresidentBarack Obama says he doesn’t want. The White House has so far been noncommittal about coming to the aid of CIA-backed rebels, wary of taking steps that could trigger a broader conflict.

U.S. officials said Russia’s targeting of its allies on the ground was a direct challenge to Mr. Obama’s Syria policy. Underlining the distrust, the Pentagon decided against sharing any information with Moscow about the areas where U.S. allies were located because it suspected Russia would use that information to target them more directly or provide the information to President Bashar al-Assad’s regime.

American officials and the allied commanders said several other rebel groups covertly backed by the U.S. and its coalition allies have also been targeted by the Russians. They include the First Coastal Division, whose base in northern Latakia province near the Turkish border was struck twice on Oct. 2 starting at 9:45 p.m., according to the group’s commander, Capt. Muhammad Haj Ali.

The Obama administration briefly considered asking the Russians to avoid certain areas inside Syria held by moderate opposition rebels, officials said. But they set aside the idea when it became evident the Russians could use the information to more directly target America’s allies.

There have long been skeptics within the Obama administration and the Congress about the CIA’s arm-and-train program in Syria, reflecting doubts in both branches of government about the ability and the wisdom of trying to build an anti-Assad army from scratch.

“On day one, you can say it was a one-time mistake,” a senior U.S. official said of Russia’s strike on one of the allied rebel group’s headquarters. “But on day three and day four, there’s no question it’s intentional. They know what they’re hitting.”

Yes, they indeed do “know what they’re hitting.” They’re hitting any and all targets that are strategically significant for Assad’s enemies which means that, as we’ve said repeatedly of late, this is going to be over in a matter of months if not weeks unless the US decides it’s finally time to deploy the best recession cure of all: war.

And as unlikely as you may think that is, the media seems to be preparing the American public for a possible direct confrontation with the Russians. As a reminder, Moscow’s warplanes allegedly violated NATO member Turkey’s airspace on Monday and thanks to Erdogan’s need to secure Washington’s acquiescence for Ankara’s crackdown on the PKK, the US is flying sorties out of Incirlik which means, as we noted earlier today, “close calls” between US and Russian jets are likely to increase. Here’s CBS:

U.S. pilots flying F-16s out of Turkey first picked up the Russian planes on radar. The Russians closed to within 20 miles, at which point the American pilots could visually identify them on their targeting cameras.

Lt. Gen. Charles Brown, commander of the American air campaign, said the Russians have come even closer than that to his unmanned drones.

“The closest has been within a handful of miles of our remotely piloted aircraft,” said Brown. “But to our manned aircraft they’ve not been closer than about 20 miles.” 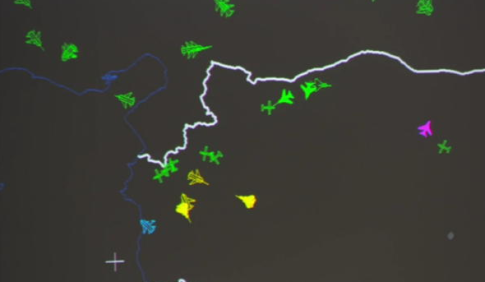 Brown said he intends to simply work around the Russians in Syria, and he doesn’t think they will crowd out American operations.

“We’re up a lot more often than [the Russians] are so when we do have to move around [them] for safe operation, it’s for a small period of time compared to the hours and hours that we’re airborne over Iraq and Syria,” said Brown.

NATO on Tuesday rejected Moscow’s explanation that its warplanes violated the air space of alliance member Turkey at the weekend by mistake and said Russia was sending more ground troops to Syria.

With Russia extending its air strikes to include the ancient city of Palmyra, Turkish President Tayyip Erdogan said he was losing patience with Russian violations of his country’s air space.

“An attack on Turkey means an attack on NATO,” Erdogan warned at a Brussels news conference.

NATO Secretary-General Jens Stoltenberg said the alliance had reports of a substantial Russian military build-up in Syria, including ground troops and ships in the eastern Mediterranean.

“I will not speculate on the motives … but this does not look like an accident and we have seen two of them,” Stoltenberg said of the air incursions over Turkey’s border with Syria. He noted that they “lasted for a long time”.

The incidents, which NATO has described as “extremely dangerous” and “unacceptable”, underscore the risks of a further escalation of the Syrian civil war, as Russian and U.S. warplanes fly combat missions over the same country for the first time since World War Two.

Meanwhile, The Kremlin is being careful to preserve its image as the hero in all of this by formally rejecting calls for a no-fly zone, even as Russia’s bombing raids have effectively served to keep everyone else out of the skies. Via Bloomberg:

Russia rebuffed calls for a no-fly zone over Syria as Saudi clerics and Islamist rebels urged for retaliation against its extended bombing campaign that has targeted Islamic State and other militant groups in the Arab country.

Officials from Moscow ruled out sending troops to take part in ground operations in Syria, a day after the head of the Russian parliament’s defense committee said volunteers could go to fight, including some who took part in the conflict in Ukraine. NATO meanwhile said Russian incursions into Turkish airspace in recent days looked deliberate.

A no-fly zone would breach Syrian sovereignty and “isn’t based on the UN Charter and international law,” Deputy Foreign Minister Mikhail Bogdanov, who is Russia’s special presidential envoy to the Middle East, said in an interview published Tuesday by the Interfax news service. “Of course, we are against this. You need to respect the sovereignty of countries.”

Russia began its air campaign last week to bomb Islamic State and other jihadist groups in Syria, its first foray outside the former Soviet Union in more than three decades. Syria’s opposition groups, including Islamist rebels, and anti-Russia fighters with Islamic State have criticized the move, with many likening its intervention in Syria to the Soviet Union’s involvement in Afghanistan that began in 1979.

“Many” may ideed be likening it to the Soviet-Afghan war but one person who certainly is not is Moscow’s spin lady extraordinaire Maria Zakharova:

So there you have it. But even if Russia doesn’t intend to repeat the Afghan experience, and even if the notion being propogated in the Western media that Moscow’s effort to eradicate Assad’s opponents will somehow promote terrorism is largely a myth, it looks as though the Saudis are set to promote still more violence in Syria thus creating a kind of self-fulfilling prophecy, and on that note, we close with this from Bloomberg:

More than 50 Saudi clerics called on Syrian rebels and Muslim countries on Monday to support a jihad against Syria’s government and its allies.

“This is a real war on Sunnis, their countries and their identities,” said the statement. It urged the rebels to join a “jihad against the enemy of God and your enemy and Muslims will back you every way they can.”